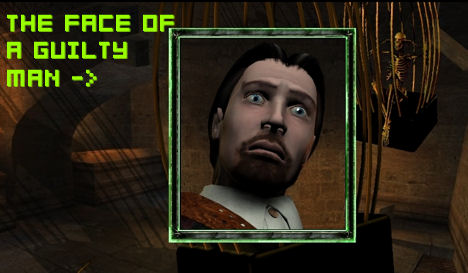 Majestic’s Limbo of the Lost is a PC game with some balls. Not so much because it pushes boundaries or introduces risky new gameplay elements that we’ve never seen before, but because it has the brazen brass ones to rip off entire sections of 2006’s most popular RPG without any shame whatsoever.

The theft was discovered by GamePlasma (site may be down due to being linked like crazy) who provided comparison shots of Oblivion backgrounds and Limbo backgrounds. The results are absolutely stunning and you can find two of the shots right here. Aside from the character, hand and compass, everything in the Limbo screenshot is directly lifted from Bethesda’s Oblivion, including the exact same portrait hanging on the wall. It’s also likely that the game stole from other titles including Diablo 2, Painkiller, Thief, UTK3, Morrowind and even Silent Hill 4. That’s pretty amazing.

If it was just that one hall, maybe Limbo would have gotten away with it. Unlikely, but maybe. However, a whole host of Oblivion scenes have been lifted and stitched into Majestic’s version of what could only be called a game development heist. Now that the jig is up, publisher Tri Synergy has ceased distribution of the game, stating it was “just as shocked as everyone else” to find out about the dirty theft. It currently awaits word from the culprits themselves.

I am not so much shocked about Limbo of the Lost stealing whole scenes from another game, but the idea that Majestic felt it could steal from one of the most well-known games of recent years and even hope to get away with it. Remember, when you need to steal something, steal from below to a lesser game. Never steal upwards, you incompetent boobs!