The crazy ride continues with a third game for the thirteenth chapter of Square Enix’s flagship series. But Lightning Returns: Final Fantasy is quite a bit different from the previous two titles. Giving it a go with our very first hands-on, I found that it took me a while to warm up to some of the new ideas.

But now I’m convinced. I think. 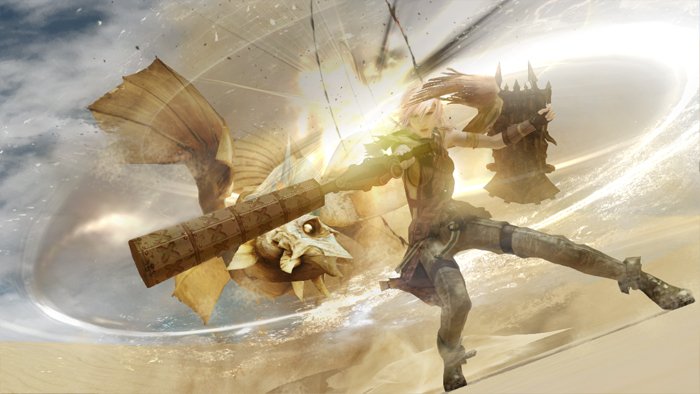 Take the story you know and fast forward some 500 years after Final Fantasy XIII-2 . Set it in Gran Pulse, change up the characters’ outfits to something even crazier, and jumble up the story so that anyone playing a demo will have no idea what’s going on. Then, take the combat and rework it to be more action-oriented and fast paced. Hell, even throw in a block button. That’s Lightning Returns in a nutshell. It sounds like I’m hating, but I’m not.

Beyond this setting information I really can’t give you any color as to where the story is headed. I apologize, but you know how Final Fantasy games are. All I could gather is that Lightning is out to find Snow in this section of the game. It seems that Snow is the patron of the city that the demo is set in, and has taken over as a sort of ruler of the city. For some reason he is on the run. Beyond this overarching story bit, later in the demo, I ran into new character Lumina. She’s a mysterious girl that looks a bit like Serah, and she seems to like to toy with Lightning, appearing out of nowhere to give her trouble. 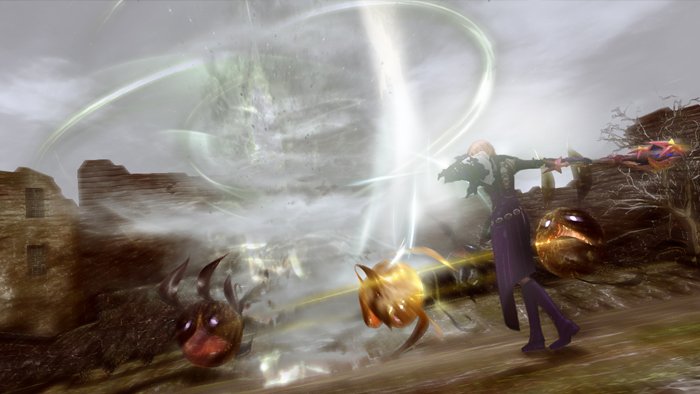 The majority of my play time was spent diving into the new action-oriented battle system of Lightning Returns. As crazy as it sounds, Square Enix has dumped taking turns and flipping through menus for direct attacks assigned to the PS3 controller’s face buttons. This means that you’ll hit a button and you’ll see it happen, all while having free run of the play field with the left analog stick. While turn-based commands are gone, they’ve kept the Active Time Battle (ATB) gauge, but it works more as a meter that lets you know how many attacks you have left than anything else.

Lightning fights alone in battles, but she’s a walking army now, so there’s no need for other party members. She has an arsenal to pull from with the game’s new schema mechanic, which series fans will see as a combination of the Paradigm and Garment Grid systems. Lightning has multiple move sets and equipment load outs, called schema, with each falling under one particular type of Final Fantasy job. For example, the Dark Muse schema gives her light and heavy slashes, but also access to the Electric Blitz spell. Players are free to mash away on these attacks, but as each are used, the ATB gauge decreases. A drained ATB gauge means that Lightning will have to wait around for it to refill, or change schema. Each schema has its own ATB gauge, so you’re free to instantly change between them (switching is assigned to LB and RB), using the set that would be best for each given battle, and working to use the proper attacks to exploit enemy weaknesses. So, the Paradigm side of the schema system has Lightning’s move set changing, while the Garment Grid  (Final Fantasy X-2) has her equipment load out and appearance changing. I realize how weird it sounds, but it works. 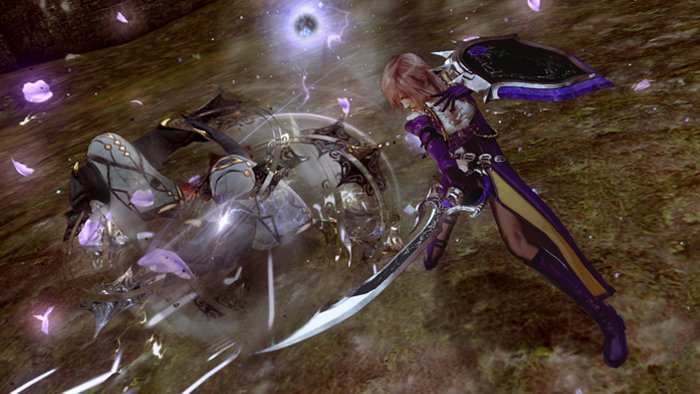 And I’m not sure how many sets will be in the final game, but I saw a few of them in my demo time. The sorceress set had my favorite outfit.

Every set has a block button, and you’ll have to be read to block and respond to heavy attacks to survive key battles, it seems. Incoming attacks from the enemies I fought were easy to spot, so I had no issue blocking and planning out my next attack. But it took some getting used to.

It was pretty hard to wrap my head around having to run up to a character and slash him manually at first. It felt odd to bash on buttons and see attacks play out instantly, especially when you’re used to waiting. I think my first hangup is that I was waiting for some kind of flow to unfold. It never did, though. But after a few battles I found that I was over-thinking things. I eventually realized that a standard enemy field encounter is easily dealt with: mash buttons and watch it die, and then enjoy the new (and very slick!) victory fanfare. Some enemies provided more of a challenge than this, but the process doesn’t really change for them. For these encounters, you try a few attacks from different schema to learn weaknesses, exploit those when you learn them, block the big attacks as they come to you, and then finish the monster off. Easy. And when I stopped getting hung up on the lack of menu-based flow, I started to have fun.

Post-battle, you’ll have to heal as recovery is not automatic, as has has been in the other two XIII games. 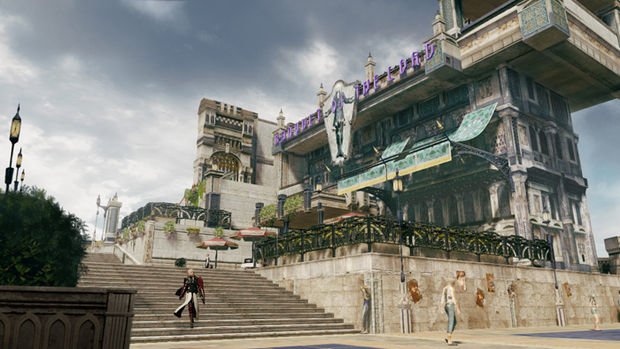 Running around in the world is a bit different now, too. In keeping with the action-oriented theme, Lightning can now jump on the world map. See a ladder? Climb it! Also, a new dash feature lets her run from location to location, though doing so will deplete her ATB gauge. She can also get the jump on encounters by sneaking up and attacking enemies from behind. Early hits bring battle advantages, while missing brings penalties. For example, missing once had me starting battle with 5 percent less hit points.

Getting back to the battle system, a boss encounter uncovered a bit more depth. XIII’s Stagger system returns, though it too has seen some action-type upgrades. You’ll still send out attacks that exploit enemy weaknesses to temporarily knock them out for a chance to do extra damage, though it seems to take more work now that the battle system has an action slant. A Stagger Wave gauge shows the effects of your effort — the more wavy and erratic it gets, the closer you are to staggering the enemy. Of course, proper use of spells or attacks that exploit weaknesses do the most toward staggering, but now nicely timed blocking of enemy attacks also helps. It’s like you’re out to piss off the enemy in every way possible until it just gives up and lets you kill it. It’s certainly more fun this new way. 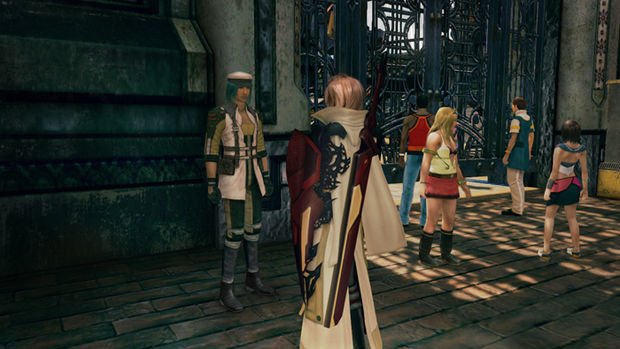 In the final boss battle of this demo, I was up against Zaltys, and I knew it had a lightning weakness. I found myself frantically scrolling through my schema, using every lightning-type attack I could, as fast as I could. I found that I was using every ATB gauge as fast as I could, but could never get over the threshold that would stagger the enemy.

In seeking help, Square Enix explained that I was missing one key advantage: Overclock. Once earned through constant battling, a filled Overclock gauge lets you accelerate time, which basically gives Lightning an opportunity for unhindered rapid attacks. So, getting back in, I held back, hitting Zaltys with standard attacks until I knew that all ATB gauges were filled. Then I went at it, running it down some, getting the Stagger Wave going a bit. With one press of LT, Overclock was initiated, giving me nearly unlimited attacks. I quickly plugged away at lightning-based attacks until it was staggered, and then finished it off when it was down.

How fun! When that battle was over I realized that I forgot about my initial hangup on the lack of flow in battles. It’s all about speed now. Once you get into it, battles are pretty fun in Lightning Returns. 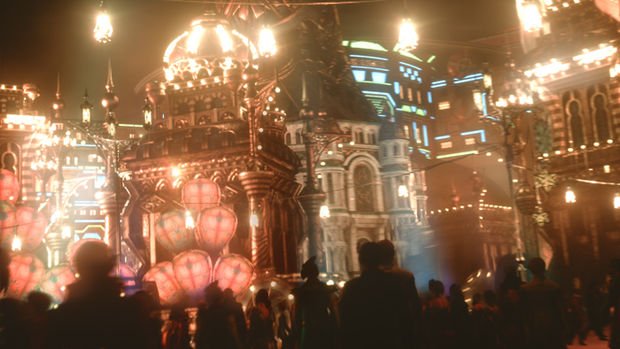 Look, I can’t make any promises about the story of Lightning Returns. I don’t know if it’s going to be ‘linear’ or not. I don’t know if the outfits are going to drive you up a wall or not, either. But I do know that my primary interest again lies with the battle system. While it’s quite different from the turn-based Paradigm system this time around, it’s still a lot of fun. I’m ready to welcome Lightning’s return for the battle system alone.