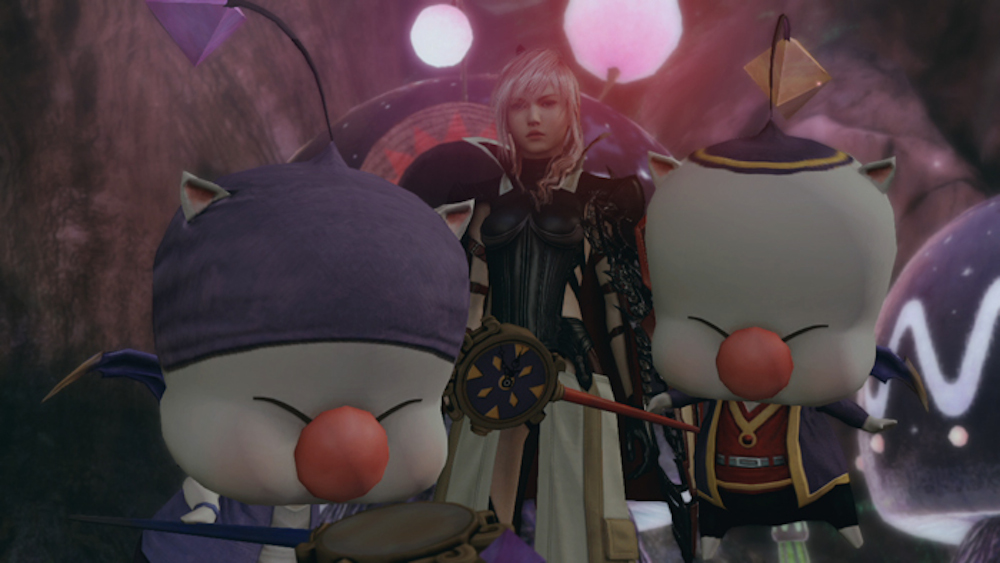 Our preview from the final release

I’m coming off over 30 hours of nearly non-stop play of Square Enix’s latest, Lightning Returns: Final Fantasy XIII, and I have a lot to say. Of course, I’ll hold the full verdict back for our review, coming early in February, but I hope to cover a lot of ground and answer a lot of questions you’ve had in this preview.

If you have any other questions beyond what is covered in this preview, hit me up in the comments section below and I’ll do my best to answer them without breaking embargoes that I’ve signed off on.

While I enjoyed both Final Fantasy XIII and XIII-2, I’ve had issue with the storyline that runs throughout. The main problem? I still don’t fully understand it. Square Enix went about telling the story in a weird way, and with all the crazy pronouns they decided to use, I was never quite sure what was going on.

The good news is that Lightning Returns tries to tie up some of the loose ends to make sense of the things that left us hanging. Square Enix does a pretty good job of quickly recapping the series up until now, for those who missed the first title, or were completely lost. And things seem to be headed to a place where a conclusion makes sense. I mean, what can happen beyond the end of the world?

The other good news is that the story is a bit lighter this time around, making it easier to follow. You’ll also revisit some old friends from the previous games. I’ve run into Snow, Hope, Vanille, Fang, Caius, Yeul, and even Sazh so far. There are some other returning characters that I won’t spoil, including a couple of surprises. Just keep in mind that they’ve all changed in the 1,000 years that have passed since the first game. Not all for the better.

Yes, 1,000 years. And yes, the game does explain how they’re still around.

From what I’ve seen so far, I don’t know if fellow fans will get full-on closure with the Final Fantasy XIII story, but at least it seems like they’re trying to wrap it up.

If you’re expecting seriousness in Lightning Returns, I’m here to warn you before jumping in. This third game is about as lighthearted and silly as they come. While the underlying main story is all about Lighting’s quest to save souls and build a new world, just about everything that lies on top of that is as kooky as it gets.

I personally loved seeing Lightning suffer through comical scenes while trying to be her cold, over-determined self. Even some 30 hours in, it never feels natural. But it works! What I think what makes Lightning Returns unique is its weird blend of seriousness and goofiness. I don’t want to spoil anything, but your steely heroine ends up doing things that you never would have imagined she would. Square Enix really had fun with this one. Some of the music alone will have you rolling.

Where this really hits home is in the game’s many real-time cutscenes. No matter how serious the scene, the outfit you put Lightning in is the one she’ll wear in the next scene. To see her talking about the end of the world or mulling over her greatest fears in a bubble-gum pink skirt and bunny ears is never not funny. Well, unless you hate humor or fan service. If that’s the case, you should definitely skip this game.

Would you look at the time?!

As you may have heard, Lightning Returns happens over just short of two weeks. You’ll run around each virtual day, trying to do as much as you can to save the souls of the world before time runs out. You actually have a curfew! Lightning has to check in at 6:00 a.m. every morning, and this is strictly enforced. It doesn’t matter if you’re in the middle of something — you’ll be whisked off into another dimension right on the hour. Sometimes that’s pretty frustrating.

I wasn’t prepared for the time limitation. When I first started Lightning Returns, I really took my time to explore the game’s four world. With so much to see and do, I thought that the game would leave me plenty of time to goof off. But after about five in-game days it occurred to me that I might not get everything done in time, so I found myself rushing to get it all done before the clock runs down. I’m at the point now where I’m rushing, and I think that takes away from the experience a bit.

While we can’t get too far into the plot without ruining things for you, we can say that it is possible to stretch time out a bit. Lighting is out to save souls, and bigger saves earn her Eradia, which can then be pumped into the world tree Yggdrasil to extend time.

Lightning Returns provides seemingly endless combinations of clothing, armor, weapons, and accessories for Lightning to wear. You can keep it serious, or you can do like me and go nuts with the combinations. Everything from retro pixelated face masks to satin scrunchies are available to play with. Dead chocobo hats and zebra eye patches? Sure. That’s not even the half of it. These silly accessories all stack on garb that you acquire, and can be coordinated with matching weapons and shields.

While it’s certainly fun to change Lightning’s look, the garb choices you make also have an effect on battles. These outfits that you put together are saved as Schema. You have the ability to freely switch between these in battles to call upon their abilities, letting you mix and match their powers for maximum benefit.

Each outfit has active abilities or benefits to consider when you’re deciding on which four abilities to assign to it. For example, a suit with magic-boosting abilities would go better with Firaga spells than it would that big ol’ sword.

The battle system took me a good bit of time to get used to. We went from a modification of turn-based battles to a full-on action affair where Lightning is free to move around the play field. Add in the aforementioned Schema switching and you have something that is quite different from its predecessors. I’m glad the first battles were easy, because I was just not getting it. It took me a good couple of hours to feel really comfortable.

I learned that properly blocking and countering is almost as important as attacking in Lightning Returns. It took me awhile to get a feel for watching the actual enemy and not my attack prompts or time bars. You have to watch their animations to know when they’re going to hit you. If you built your outfits properly, you should have at least one blocking ability equipped. Hitting that before these attack animations start is key to staying alive. If not, you’ll be seeing that reload screen pretty often.

With this battle system, timing is key. Hitting that block ability at just the right time will let you counter attacks. Some well-timed blocks will even stagger enemies, letting you finish them off quickly. Timing of attacks is also important, given that each drains your active time bars a bit. Working out how you’ll juggle the three Schemata and their attacks without leaving yourself high and dry is essential to surviving. Timing is so key that an enemy casting Slow on you really hurts. Slow is this game’s Poison.

Movement also plays a big part in the battle system, for both Lightning and enemies. Encounters usually have the enemies in a cluster, but they fan out as the battle progresses. If you can get off your larger area-of-effect spells before they disperse, you’ll fare much better than those with slow reflexes. While attacking enemies will automatically close the gap (and you’ll do the same to them), staying out of the way of a crowd of enemies will always benefit you, especially if they’re playing with a similar kind of firepower. It only took me a few times to be annihilated in this way to learn.

On the attacking side of this, I found great joy in jumping into a battle and immediately sending off a near-endless chain of debilitating Blizzaga and Aeroga attacks to grind enemies down before they could even approach me. By mastering the timing, I was able to sort of chain a row of these attacks. By the time I used up my ATB, the enemies would usually be staggered and ready for a slashing with my physical attack set. Finding combinations like this is very satisfying.

The battle system is pretty different, but once you get it, it feels good. I’ll have a lot more to say in my review next month.

Questing is kind of optional, but not really:

I was not prepared for how quest-heavy Lightning Returns is. In fact, after getting through the first quest, I was surprised to find that the game is pretty much wide open for exploration. To finish, you’ll have to work through the game’s main quests, but much of the gameplay revolves around the side and world quests.

I hope this is not a spoiler, but Chocolina returns as your quest giver. She’s crazy as ever, but just as helpful with doling out new quests for each of the four lands you’ll explore. And while the majority of the quests are fully optional, I quickly found that they’re paramount to growing stronger. In fact, Lightning Returns‘ only method of “leveling” is by completing quests. Aside from items and outfits, points to your strength, magic, hit points, and other stats are your rewards.

But the quests are pretty good. There are some basic fetch quests to start you out, but they grow in complexity as you progress, and many of them have been really entertaining. It feels weird to take on optional, silly side missions when you know the world is ending in only days, but the whole situation adds to Lightning Returns‘ strange charm.

Finally, Lightning Returns is pretty difficult. Square Enix advised that I start play on’ Easy,’ and as any good gamer would, I ignored their advice and started on ‘Normal.’ I wouldn’t advise that on your first time out now, as the speed of battles is just too quick to get a handle on at first. Getting a feel for the type of strategy involved for this new battle system is required before going in headfirst.

I went back and started the game on Easy. But now, even on Easy, in boss battles I’m using every available item slot, perk, stat booster, and trick I know to make it out alive. Even some standard encounters have me sweating it! I can’t imagine some of the later boss battles on a Hard mode.

My thoughts so far:

Looking back at the 30-some hours I’ve played of Lightning Returns so far, I don’t know if all fans will swallow the story’s direction, and I’m sure there are other more serious fans that won’t dig the nearly endless fan service. I honestly don’t mind either.

Every time I talk about Lightning Returns I feel like I’m trying to sell long-time franchise fans on it. Maybe I am. I guess that’s because I really like it. The story is scattered everywhere, and there’s so much silliness that I sometimes struggle with it, but at the end of the day I still find myself coming back. With the crazy costumes, off-the-wall quests, new battle system, and new worlds to explore, I’m having a lot of fun.

Check back with us early next month for our full verdict.