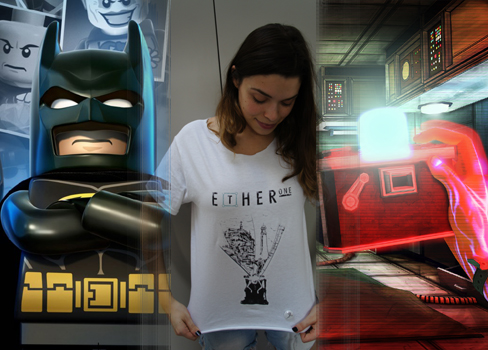 A week and a half ago on Sup Holmes (now on iTunes) we were graced with the company of Ms. Holly Pickering, former artist on the bulk of Traveller’s Tale’s LEGO games, currently working on Ether One from White Paper Games.

Holly has an ability to talk about incredibly personal, difficult stuff with a total stranger in front of thousands of people, all without ever seeming self-centered or melodramatic. It’s equal parts charming and disarming. Her humility and positivity shine through, even when focusing on the many life-changing challenges she’s gone through. From a childhood of bonding over computers with her dad, to teenage years wrestling with disapproval from others for loving art and technology, to getting work at Traveller’s Tales shortly thereafter, to losing her father to suicide, to going out on her own to work on more personal projects; no topic was off limits.

By the end of the episode, I was ready to simultaneously laugh, cry, and cheer for Holly all at the same time, while she appeared completely unimpressed with herself. Regardless of what she may work on in the future, she can count me among her biggest fans. Thanks again to Holly for appearing on the show, and make sure to tune this Sunday when we welcome Cristina Vee (songstress and voice actress on Shantae, League of Legends, Skullgirls and many others) to the program.