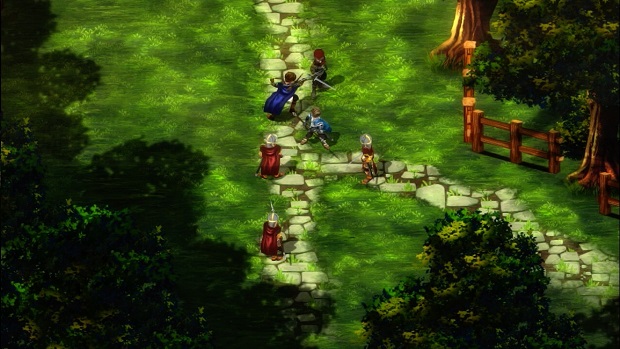 Coda Games’ sole developer John Rhee just uploaded a revealing new pre-expo teaser for his Kickstarter-funded SRPG trilogy, Liege. In it, we get to see the most recent gameplay footage of the elegant, turn-based/tactical combat mechanics he’s been perfecting.

When describing the combat in Liege, Rhee highlights that it’s “both tactical and turn-based,” and that battles will “emerge seamlessly as you wander through the realm.” So, gone are jarring battle transitions that we’ve grown accustomed to in JRPGs. In Liege, your heroes will simply draw their weapons on the field where they’re standing, and the fighting will commence.

From what I saw in the new teaser, the transitions do look smooth. When characters entering combat approached one another, the field transitioned to a familiar tactical grid showing where each warrior could position themselves according to how many moves they had left to spend. From there, characters could chain attacks, moving from one target to the next, brutally dispatching foes. Seeing that played out from tactics to execution looked incredibly satisfying.

Liege is planned to release as a trilogy with a continuous story arc. Platforms listed on the title’s Indie Megabooth page are PC, iOS, Android, PlayStation 4, PS Vita, and Wii U. Part One of the trilogy is scheduled to release sometime in 2015.