Of all the upcoming indie games created with Microsoft’s XNA tools, Dean Dodoril’s Dust: An Elysian Tail is perhaps the best known. This is because a.) it’s beautiful and b.) Dodoril’s lupine protagonist (the eponymous Dust) provides easy fodder for furry jokes.

Last week, Dust was a part of Microsoft’s Dream.Build.Play competition, competing against the best unreleased, XNA-created games out there for a chance at $40,000 (which Dodoril won handily). The six finalists were playable at PAX last week, and I had the good luck to spend a few hours Saturday morning checking them all out.

I started off with Dust, and the only reason I stopped is because I had five other games to play and a growing line behind me.

Let’s be honest, here — there’s a reason that Dust won the Dream.Build.Play competition. Dean Dodoril’s solo (!) project might not be as innovative as, say, Cadenza’s Sol Survivor, but it’s a highly-polished, intuitive side-scrolling brawler-cum-action RPG that will suck you in with its oil-slick combat and Muramasa-pretty visuals. The real news here, however, is that Dust represents the efforts of one dad and “roughly 6 months” of hard work.

I’m going to tackle the most obvious and eye-catching part of Dust — its visuals — first, so that I can move onto something more interesting. Dead Dodoril’s hand-drawn animation is graceful and smooth (Dust’s walking animation aside) and the colors are bright and vibrant. This attention to visual detail seems to stem from the fact that Dodoril is also working on a traditional animated film called — wait for it — Elysian Tail.

With that in mind, I’m a little concerned that Dust might just be a vehicle for Dodoril’s multi-medium fantasy epic. In the half-hour segment that I played, most of the plot was delivered through some text-only interactions between Dust, his Miles Prower-inspired sidekick Fidget, and his talking sword Ahrah as they traipse through the world of Falana. What I’ve seen of the story seems to be a basic fantasy affair delivered rather blandly. 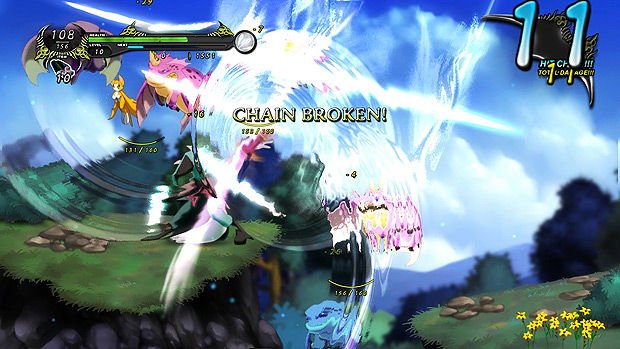 Dust‘s main draw, however, is the 2D platforming and brawling. The controls will be familiar to anyone who’s ever played a modern action game: there’s a light attack, a heavy attack, and a projectile, courtesy of Fidget. Holding the heavy attack creates an overly-useful spin attack that can be combined with Fidget’s projectiles to create a missile swarm that easily dispatched everything I found in the first section.

The ostensible downside is that holding the spinning move too long will hurt you, but I never noticed. There’s also a combo system that resets itself if you get hurt, but I never noticed that having much effect, either. Completing combos refills Fidget’s power, but its main function seems to goad perfectionist gamers into digging into the minutiae of the game’s combat mechanics, something to which Dodoril isn’t opposed: “It was also important for me to create a game with options to allow players of any skill to have fun. I love hard games, but as a parent I sometimes want to take it easy, and it’s a thrill to see my children have fun with my game. Of course, anyone who wants a real challenge will also be pleased.”

In my experience, Dust differentiates between the slightest taps and button presses allowing the player to feel truly responsible for the combos and suggesting a nice learning curve for newcomers and veterans alike. Dust skirts a fine line between fluid combat and loosey-goosey button mashing, but I’m inclined to think that its combat might be tighter than a few hasty minutes would suggest. 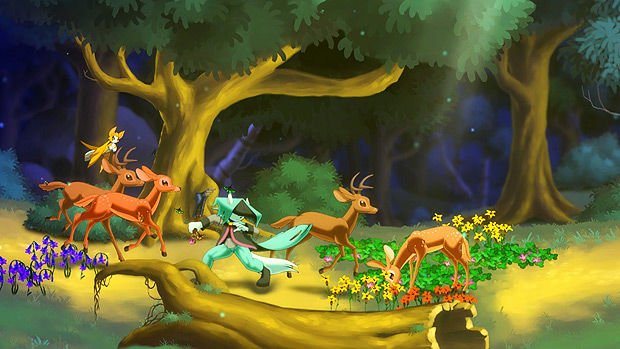 The first section I played featured a few branching paths through the level, but with no power-ups, treasure, or hidden bonuses — only endless waves of enemies — there’s little motivation to explore. There is, however, an RPG-lite leveling system and shops to buy healing items, so those branching paths may lead to some sort of currency that didn’t make the cut into the Dream.Build.Play demo. Nevertheless, given the repetition inherent in the sidescrolling brawler genre, Dust threatens to get stale, but probably not until after you’ve enjoyed several hours killing some of the most beautifully rendered enemies in the most stunning, aesthetically stimulating fashion that XNA has to offer.

Dust: An Elysian Tail won the Dream.Build.Play and Xbox Live Indie Games People’s Choice competitions and will be up for consideration for Xbox Live Arcade . In the meantime, no platform has been officially announced, but an Xbox Indie Games release seems probable.