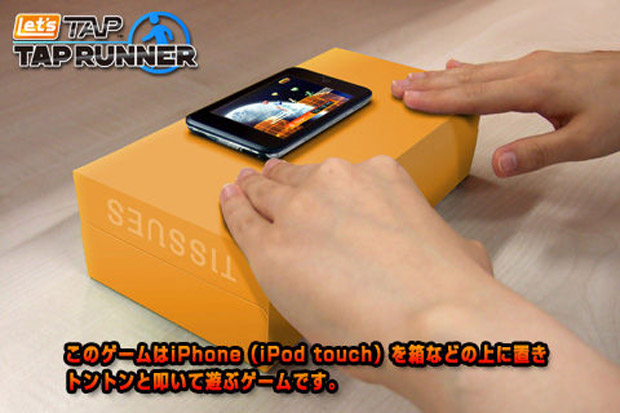 It was about a year ago, at the 2008 Tokyo Game Show, that we first saw Sega and Prope’s box slapping Let’s Tap for the Wii. We were pretty enthusiastic about it at first. Then it came out here earlier this year. We liked it well enough, I guess. It’s just that the thrill of hitting of old cereal boxes kind of wears off after a bit. Maybe it will be different on the iPhone. Wait, nevermind. It won’t be that different.

Sega has just announced the iPhone version of Let’s Tap. Believe it or not, it still uses that surface-sensing tap control, though some touch screen action is supported. Andriasang says that the plan to split the games up into a series of releases that will cost between 100 and 500 yen a piece, spread out over September and October. All the little games of the Wii version are accounted for, including Tap Runner and Rhythm Tap.

The soundtrack, which is arguably better than the game, will also be hitting iTunes. The 21-song soundtrack will be 1,800 yen.

I’d get down with some on-the-go Tap Runner. Are you going to bring this to the US, Sega?