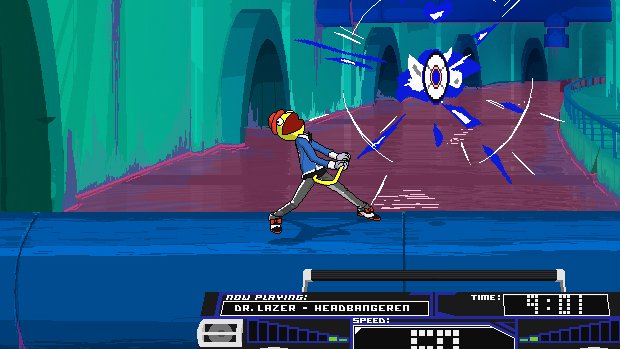 After more than a decade of ignoring fighting games (Super Smash Bros. notwithstanding), Divekick! did a lot to reignite my interest in the genre. By kicking out conventions and reimagining what a fighting game can be, it became a weird distillation of fighting games while existing as its own completely unique thing. After watching the trailer above, Lethal League looks like it might have that same power.

Fighters in Lethal League have a baseball bat or some other blunt object, but the twist is that they do not use the items to attack opponents directly. Instead, players may only take damage from a neutral ball that is hit by an opponent, and it can really go flying at times. If timed correctly, a fighter can counter with his own hit; if the swing connects, the ball ricochets back at the original attacker. It almost looks like a cross between Arkanoid and dodgeball.

It reminds me of some of the coolest moments in Smash Bros., like when Samus has a shot charged up, she unleashes it, but Mario flips it right back at her with a well-timed cape swish. Lethal League looks like any entire game built around that interaction. Radical?

Lethal League is set to release for PC this fall. A Flash prototype can be played here.