[At first I thought I was going to love Super Mario Maker. But after a while, I realized that the bad curation of levels really hampers my enjoyment of the game. It’s all about finding good levels from good curators. So do yourself a favor and start with some principles from Fuzunga. ~Strider]

I’ve basically been wanting to make video games since as long as I’ve been playing video games. I think most gamers have. But I think we take video games for granted. On a few occasions I’ve actually tried to make my own games and it’s a lot harder than it seems. Even games that seems simple, like a top-down Zelda style game, have incredibly intricate rules.

I’ve even tried software built to make game creation simple with stuff like drag-and-drop interfaces. Trust me, you’d probably have an easier time pushing your car uphill than making a simple, bug-free game in a month for a class assignment where you’re with a group of three other people and they don’t put in the same amount of work and you have to animate sprites by yourself while your friends are off actually playing video games but you can’t because you’re busy making one and it’s not fun anymore.

And then came Super Mario Maker.

Nintendo has created a piece of software that makes it incredibly easy for you to make one type of game: a sidescrolling Mario platformer. They take care of the complicated parts so you don’t have to worry about it, leaving you to just drop things into the game and have them work according to set rules.

With the elements of the game already defined for you, all you have to do is combine them in any way you want (and the rules allow). This has lead to some really awesome, creative work that spans the spectrum of clever (Frogger and Space Invaders recreated) to imaginative (Pipflip Airship) to brutally challenging (PangeaPanga). Super Mario Maker is truly the gift that keeps on giving, with amazing new experiences every time you play.

While Super Mario Maker hasn’t taught me anything about programming a game, it sure has taught me about game design. And not necessarily from tutorials or anything like that. I’m talking about playing terrible levels. Many, many terrible levels. There are literally tens of thousands of people uploading utter crap every minute. And while you might be tempted to quickly exit or swipe away a failure of a stage forever, maybe you shouldn’t. Maybe you should play that garbage so you can better understand how not to design Mario stages. Sure, you could play great stages for inspiration, but I find playing total crap inspires me to make something people will actually enjoy playing. So here’s a bunch of things I learned from playing through people’s awful stages in Super Mario Maker.

You know what smokes my brisket? When somebody puts and item block too close to a bottomless pit so when you hit it the item flies right out of the block and falls into oblivion. Or when there’s too many blocks and it just slides right to its doom. Or there’s not enough ground for your to catch it. Or the item pops out and into a group of enemies. The point is to put your item blocks in a place with a lot of room around them, especially if they contain a mushroom! At the very least put some kind of stopper so the mushroom bounces back to you. Otherwise, you might as well not even bother having blocks with items in them. 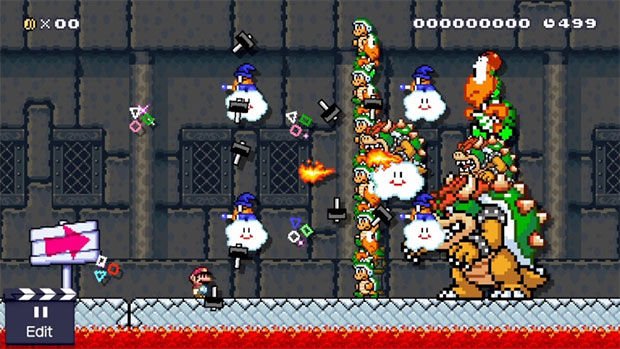 Actually think about the enemies you’re including

Do the enemies you put in your level serve a purpose or are you just throwing as many of them in there as you can because you can? Sure, you can stack a goomba on top of a koopa on top of a chain chomp on top of a winged Bowser, but do you actually need to? And, yeah, you can have five pipes spawning goombas at once or 20 enemies in a row, but is that really creating a challenge? No! No it’s not! This is artificial difficulty. Instead of making something that’s actually hard, you’re just throwing more stuff at the player which is making the game hard in a frustrating way instead of a challenging way. You can put everything in your level just like you can eat everything at the all you can eat buffet. But would you really want to eat everything just because you can?

I’ve played way too many stages where I have to suicide because the creator has left me no way to progress. Maybe I fell into a non-bottomless pit and have no way out. Or perhaps I lost the one item I need to get through a section. It is not fun for players when you do this. Do not do this! And absolutely do not create a level that’s beatable but only if you’re the guy who made it that knows the one impossible-to-find secret that’s the only way to progress! Yes, you have to complete the stage to upload it but remember that other people are the ones playing it. Make sure they can win. And if you make a stage with multiple paths, please be sure that all of the paths are clearable, not just the one you took when completed the stage to upload it.

Put yourself in the player’s shoes

At the end of the day, what you need to do is not make something for you but something for the player. Of course, you should design something you like (or else that takes the fun out if it) but try to make it in a way that will be fun for others. Remember that Super Mario Maker has no checkpoints, so try not to design a really long course that’s extremely hard because then I’m liable to just give up if I got to the end, died, and have to start back at the beginning again.

Make sure you’re clearly communicating what the player should be doing or where they should be going. Have a jump into an abyss? Why not include an arrow to indicate the jump is safe or a line of coins in the arc of the jump? Remember that you can turn on Mario’s trail to see exactly where he’ll land! Try not to throw every element into your stage.

Picking a few types of enemies or obstacles makes stages a lot more coherent and give them better flow. Then, introduce elements gradually so you can ramp up the complexity and difficulty of these elements without throwing too many new things at the player. For example, you may have a section what includes jumping between flying piranha plants, then a section where you jump between moving platforms. Later you could have a section where you’re jumping over piranha plants between moving platforms. Because, man, I’ve seen a lot of stages that are just a jumble of things. Like all the things one after another.

So here’s some of my own stages I made with these teachings in mind. I think they’re pretty good, and hopefully you will too!