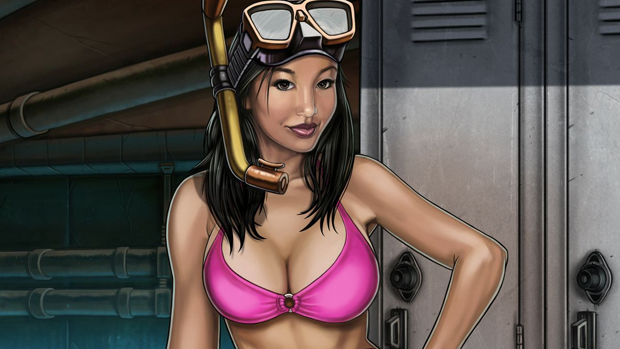 Good things come to those who bate

Some perverts burn and fade away, but Casanova Larry Laffer lives on in Leisure Suit Larry: Reloaded, a remake of the 1987 debut arriving May 31 on PC, Mac, Linux, Android, and iOS. Desktop platforms cost $19.99 while the mobile versions are being sold at $9.99.

This remake introduces a new character: Jasmine (pictured above). Chosen by Kickstarter backers, should we be surprised that she is the youngest love interest in the series so far?

Through her current employer, Caesar’s Phallus, she manages to combine both of her talents, swimming in Phallus’ enormous aquarium as a “mermaid” with Mr. Wiggles, the casino’s teenage sperm whale. Offstage, she’s responsible for Mr. Wiggles’s care and feeding, but Jasmine is more than just a marine mammal expert and underwater dancer.

But if any of that offends you, why are you reading about a Leisure Suit Larry game to begin with? It will be interesting to see the critical reaction to the original now that we are in an era where games, such as Tomb Raider and Lollipop Chainsaw, are praised or slammed for portrayal of female characters.

Though I haven’t played many games in the franchise, my experience has always been that the female characters are smarter and more powerful than Larry (the player). Though the game’s ladies cater to male horndogs, it’s hardly a power fantasy.

After the well received Fester Mudd: Curse of the Gold, I’m hopeful Replay Games will do a good job with this reboot.