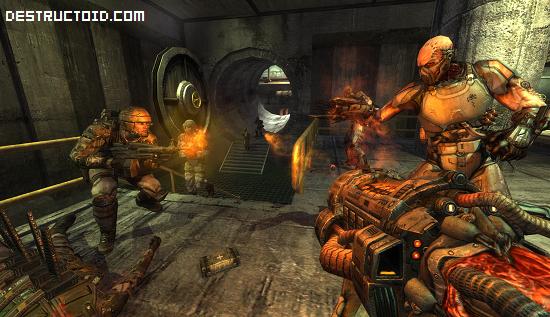 Time was short at Activision on the day I popped over for a look at the new Quake II-themed Enemy Territory game, so I unfortunately didn’t get as long as I’d hoped for with what was one of my most looked-forward-to games of the GC. What I did get though, was a very enjoyable twenty minutes in the company of some justifiably very enthusiastic members of the Splash Damage development team, as I was given a beginner’s crash course in Quake Wars.

I’ve been genuinely excited about the prospect of a huge multiplayer game set during the Strogg invasion since the title was announced, but I was admittedly a bit worried about the possibility of feeling over-awed by the scale of the whole thing when I first got hold of it. Not any more though. After a brisk walkthrough, it’s now clear that Quake Wars is going to be an accessible game for all comers right from the start, as well as a very deep and rewarding one given a bit of experience.

Don’t worry that what I said in the intro means that Quake Wars is going to be dumbed down for the inexperienced. As it was demonstrated to me, it’s not the gameplay but the interface which has been designed with simplicity in mind. Rather than downgrading the complexity of the mission structure, Splash Damage have set things up so that every new player can be an equally productive member of their side even if they don’t quite know what they’re doing or why at first.

The game will pay attention to exactly what’s going on throughout a battle area and will hand out dynamically generated missions to the appropriate individuals as and when needed. As the balance of the battle changes and the enemy makes new moves, or tactical discoveries are made which need to be acted upon, the game server will deliver messages to players with the appropriate character class and abilities with full instructions of what to do and where to do it. Even if a new player doesn’t yet fully understand the implications of their class and skill set, he can carry out productive work for the side whether it be recon, construction, or any of the other varied tasks required on the battlefield. A context-sensitive “use” key makes everything very simple to do once the right location is found, so all players can operate equally without even needing to understand their place in the great scheme of things to begin with. 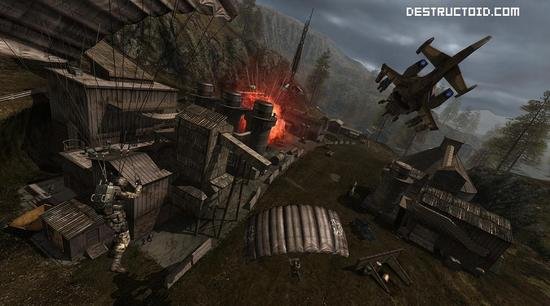 Splash Damage explained to me that as well as providing a helping hand for new players, with repeated play the system will act as a hands-on training experience to quickly bring players up to speed on what they need to know, without making the rest of their side carry them at any point during their learning. From what I saw, they definitely seem to be onto a winner, as the whole thing looks very simple and intuitive to use while not slowing down the inertia of the battle for a second.

Once players are on top of things though, things look no more overwhelming. The context-sensitive controls make carrying out tasks quick and easy, and a 3D preview and RTS-style local ground plan makes placing weaponry and equipment as straightforward as you could want. Giving out orders is simple as well, as the radio is also context-sensitive and can be used to send out objective-specific orders to the right players or bots as soon as a new task is discovered.

As for the nitty-gritty of life down on the battlefield, let’s just say that Quake Wars is another of those games capable of putting a huge giggly grin on my face. The sheer level of organized chaos I saw on the battlefield was fantastic, as squaddies and engineers darted about manning their own indvidual responsibilities, while vehicles from both sides rumbled around the countryside and thundered across the sky. 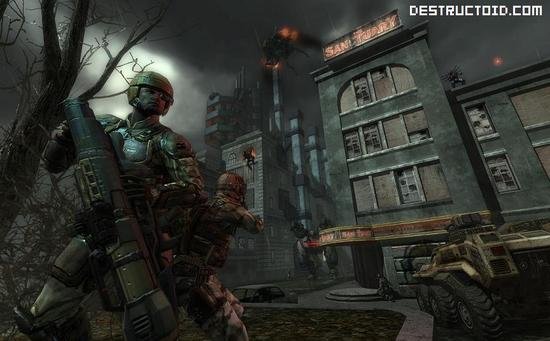 The pimped-out Doom 3 engine that Splash Damage are using is doing a great job. Imagine Quake 4 set over huge outdoor envorinments with draw detail going for miles right up to the horizon, and you’re just about getting there. The environments look to allow a great deal of versatility and improvisation in how players can approach their objectives too. I was shown a couple of sneaky shortcuts along nigh-invisible mountain paths, leading up to some stunning battlefield vistas, primed and ready for the throwing back of the head and the calling in of an airstrike. And as for getting down? Well here’s always base-jumping…

You’re not going to find any FPS-griping in this preview. Not a single drop of it. Despite the brevity of my appointment, Enemy Territory: Quake Wars gave me more of the good old “Just gimme the goddamn controls!” syndrome than anything else I saw demoed at Leipzig. The sheer vibrancy and inertia of the battlefield coupled with the variety of tasks required to make the war effort work — the actual frontline fighting is only one aspect of a much bigger picture — had me pining for more the second I left. 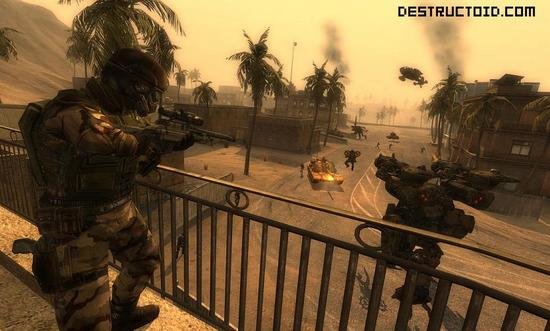 You don’t know how tempting it is to throw all professionalism to the wind and just round off this preview with a massive print “DO WANT!”, but I’ll remain composed. Rather than relying on gimmicks and quirks in an over-crowded genre, Quake Wars looks like a great idea realized with thought and skill, just like we used to get, and that’s incredibly refreshing at the moment. It’s going to be a frustrating wait until I can get my hands on it, but that wait is at least going to be sweetened by a certain something. Did I mention that for once we in Europe get it first? That’s a big fat lump of sugary icing on a particularly tasty-looking cake right there.

Now if you’ll excuse me, I’ll be over in Liverpool docks making uncouth mocking remarks in a generally westward direction…