I did not enjoy Nintendo’s press “booth tour.” Not one little bit. I never suspected for a second that they’d use the occasion to unveil anything radically new, but surely they could have done better than to spend the best part of an hour trying to find new ways of saying “We sold a shed-load of Brain Training this year.” By the end of it, I was so bored that I had to check my press pass before I could remember where I was and what I was doing there, and I had a warm, wet feeling in my ears which I suspect was a sign that a small part of my brain had melted. And don’t even get me started on their tactic of padding proceedings by twenty minutes by wheeling out the German memory champion to teach us how to remember things more efficiently. Because you know, she’s played Brain Training once or twice too, so it’s relevant.

Staggering out of that blue and white curtained den of misery a devastated man, I knew there was only one way I could save this. There was one little guy who’d always been there for me in times of need and always managed to put a smile of head-dividing proportions on my face no matter how dark the world looked. I had an insane desire to play Super Mario Galaxy already. I’d had it for months. But things had moved on after the tour. I needed to play it.

So I went back the next day, press pass brandished, and headed back-stage. Did Mario work his magic? Of course he did. And he worked some magic Nintendo didn’t want me to see too. Hit the jump for the details.

I’ll get one thing out of the way right now — this preview is going to be a failure. I like to think of myself as having a pretty deadly grasp of vocabulary, and I know I’ve got a fairly evocative turn of phrase when I turn it on, but I’m just not going to get across to you the effect Super Mario Galaxy has had on me this week. I’ve been back three times, and it still it just keeps getting better, and making me feel things I haven’t felt since I was a kid every single time I play it. I was expecting it to be better than the disappointing Super Mario Sunshine, which looked good but lacked the true soul of a Mario game, but there was no way I could ever have been ready for any of this.

You know when you’re next in line for a game you’ve wanted to play for a long time, and you can concentrate on nothing but how fast the seconds are ticking? How close the guy before you is to his last life, and your overwhelming need for him to spontaneously die of a freak accident, thereby making it your go? You don’t get any of that with Super Mario Galaxy, because you’re so enthralled with the utter wonder and invention of what’s going on on screen that you can’t possibly be in anything other than a glorious mood. Yeah, the guy in front of you in the line (or on the bean bags in my case) is doing it all, but the glaze of childish glee across your eyes is so thick, the giggles escaping from your mouth so frequent, and the sheer sense that you’re witnessing something beautiful so great that you really don’t mind at all. And besides, soon you will get to play it… 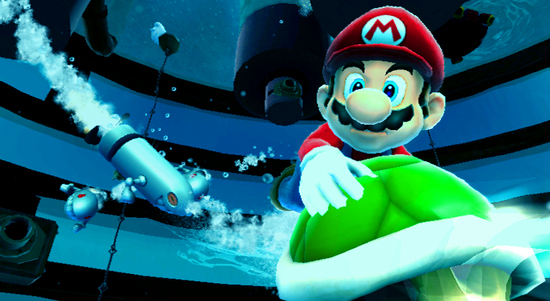 Super Mario Galaxy isn’t just better than Sunshine. It isn’t just really good, or merely brilliant. It is one of those genre-defining games that we’re fortunate enough to witness every so often, which kick the entire industry up the ass, make it clear just how badly everyone else has been slacking without even realizing it, and eventually improve videogames for all of us. It’s one of those rare games which has nothing it can be compared to, and like Super Mario Bros. 3 before it, consistently boggles you with its seemingly effortless breaking of ground while simultaneously making you wonder why we couldn’t have always had things this good.

The first level I tried was the space level Chad described in his E3 report. Playing with the multi-directional gravity of the spherical “platforms” is an stunning experience, so different to and more fresh than anything you’ll have played before as to feel almost like a whole new genre. For a while you’ll forget the freedom you have, and take the (few) flat platforms you come across at face value, running along until you reach an enemy or have to jump to the next one, as has been the only way for years. But then you’ll remember, and in one brilliant, exhilarating moment you’ll take the plunge, do the previously unthinkable, and run over the edge in a platforming game. And you’ll survive spectacularly as Mario runs down the side and then flips around underneath, before the entire game world swings around to reveal a whole new realm beneath. 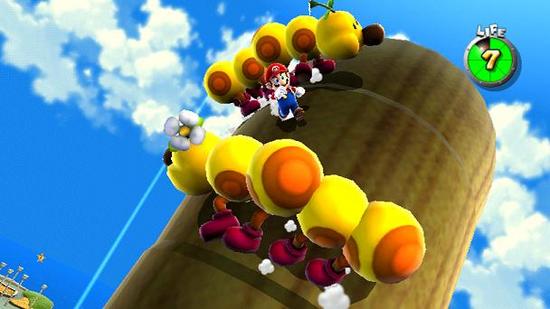 Every detail in Super Mario Galaxy seems to have been designed to make you whoop with delight. From the shimmering, vibrantly-colored incandescence draped over everything, to the new dimension added by the (very easy to do) star throwing, to the centrepiece of that particular level, swinging from star to star with the brilliantly springy interia of a Wii remote-aimed light beam, the game is a masterclass of the kind of fantastic, imaginative, and untamably fun details Miyamoto throws into his best games. Indeed, it’s very likely that it’s the best example yet of what makes Miyamoto so great, and it’s the best cure I can think of for anyone who’s lost their enthusiasm for videogames.

I avoided the bee level as Chad has already detailed it for you before, and moved onto the one with that Piranha Plant boss you’ve probably seen. You know, the massive one. Even right at the (seemingly) simple beginning I found myself beaming. It was joy enough to be simply jumping around the lush space garden environment, stomping on Goombas and admiring the the velvety sky above and below, but when I decided to go down a pipe, heard the traditional noise, and then had the whole process subverted by popping out on the other side and having the gravity flipped, I nearly dropped the Wii remote and punched the air. It’s not only outdoors that Super Mario Galaxy‘s belligerent distaste for the concept of “up” comes into play either. That level contains a bonus room with gravity on every wall, allowing Mario to run around all six sides as if they were the floor as long as he can find an interconnecting ramp to make the transition. I won’t spoil things by detailing the boss fight, but needless to say it’s a breathtaking and hilarious spectacle through and through. 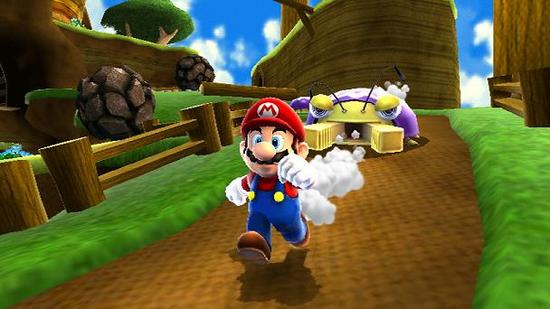 Now though, I have to go back and explain that last part of the introduction to this post. Yesterday I was sitting around and enjoying the game with a journalist from Germany when he tipped me off on a little secret he’d cracked. You see while the menu at the beginning of the game lists four available levels, the disc actually contains six, the last two of which Nintendo have been keeping quiet for a later preview. However, they can be unlocked right now if you know the right trick, and that’s exactly what I did today. When I got my go on the game, I quietly inputted the correct commands (I won’t spoil the mystery by telling you exactly how to do it, but it’s in no way difficult with a bit of experimentation), and lo and behold found the level list immediately expanded.

The first new level is the stony one briefly glimpsed in some of the recent screen shots, and consists of a long gray path winding around on itself in a tube formation. The star is at the end, and Mario has to make his way right along, corkscrewing over and over countless times before he reaches his goal. The pathway is populated by huge Thwomps (I love the way all of the traditional Mario bad guys are back) and some new hollow ones which flip and roll like the metal boxes in Super Mario 64‘s Dry Dry Desert. What really makes this level a killer and an absolute joy though is that jumping to avoid sections of the path is largely prohibited, with carefully timed running the only way through. The reason? There’s a glowing beam of light running down the core of the “tube” which has a strong gravitational pull and leads to a black hole at one end. If Mario finds himself over it without a platform between them, he’ll be pulled down and zipped along the beam to the end in seconds. Evil, but very cool. The second hidden level, I only got to play briefly. It was called Cookie Factory, and again was one you might have seen shots of. It begins with Mario having to move between two distant platforms, the in between area taken up with a thin one filled with variously shaped holes which scrolls against the direction he has to move in. It looks simple, but is surprisingly fiendish, the holes giving very little room for maneuver, and the decision of whether to jump over or run around always a constant worry.

I made it about halfway across when I received a tap on the shoulder from a press-area helper who informed me that “Nintendo don’t want you to see that part yet.” It was a little amusing given that another employee had been standing watching me complete the Thwomp level only a few minutes earlier, and had even offered advice with Cookie Factory, but I obliged his request to reset the machine and moved on. He didn’t ask me not to write about it or try to make me sign anything, and I was happy and feeling rather blessed to have seen some very cool stuff that I hadn’t even known existed a couple of days ago. By the end of that third play, Super Mario Galaxy had made my GC, so I took his instruction amiably and floated out of the press-area with a big goofy grin on my face. 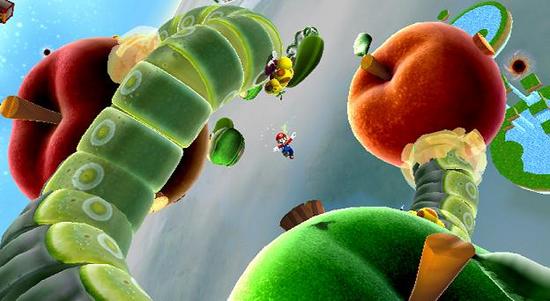 By the way, did I mention that I’m sure the level that got me busted used music from Super Mario Bros. 3? Good times my friends, good times…

Filed under... #Cooler than the other side of the pillow