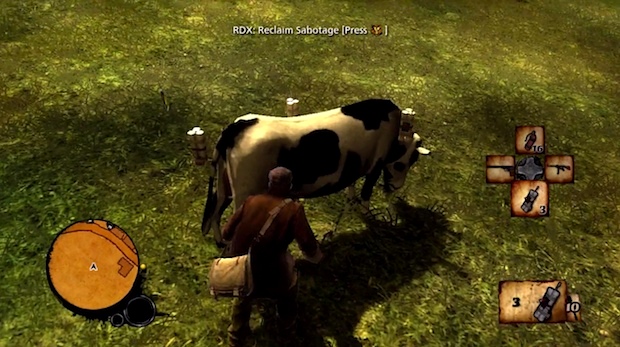 Sure, the structures in The Saboteur burst into chunks when RDX (remote TNT) is applied, but does one of the most common farm flesh-bags react the same way?

The answer is yes.

In the latest Electronic Arts podcast, EA.com’s editor-in-chief Jeff Green aired an earlier interview he had with The Saboteur lead designer Tom French. In it, French mentioned that the structures in the game are built from interlocking pieces much like LEGO towers. Mixing and swapping bases and roofs gives areas a unique flavor and keeps us from spotting — and being annoyed by — a stream of reused assets.

And it appears the game’s cows were made in the same way.

Earlier this afternoon I studied an ambient tower crashing to the ground after snapping a block of TNT on its side. It fell in massive blocks, making me think that the engine simply blew apart the LEGO pieces French described.

Feeling frisky, I decided to see if cows played by the same rules.

I’m still not sure if there’s a solid connection between the way the assets were created and how the damage engine works, but I do know that you can slap RDX on a cow and make it explode into a set number of fractured bits. (On the odd side, using a mere firearm produces the same pyrotechnic cow-gore results.)