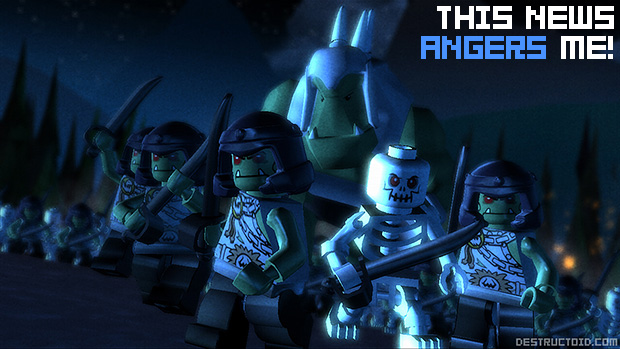 As we reported earlier, owners of the PS3 or 360 versions of LEGO Rock Band will be able to export most all of the game’s forty-plus songs to their hard drives so the tracks can be played in Rock Band or Rock Band 2. If you’ll recall, 55 of the 58 songs from the original Rock Band could be exported, and the song export key cost $4.99 (400 Microsoft Points).

Harmonix PR man John Drake told me that, unfortunately, you’ll have to cough up more than that for the LEGO Rock Band key, though he couldn’t confirm the exact price: “It’ll probably be a little bit more than five [dollars], but it’s not going to be super-expensive.” He did point out that, at least on the PS3 and 360, LEGO Rock Band is a value-priced title — at $49.99, it’s $10 cheaper than most retail games, and Harmonix figures that they can recoup some of that with the key.

In defense of Harmonix (and other videogame makers who license music), I imagine that all songs are not created equal — getting classics like the Ghostbusters theme and Queen’s “We Will Rock You” probably costs more than, say, Good Charlotte’s “Boys and Girls.” (Just guessing, of course.) And passing development costs on to the consumer is just business, folks.

[Update: Twitter seems like the place to be for breaking videogame news. Drake announced that the LEGO Rock Band song export key will cost twice as much as the Rock Band key: $9.99 (800 MS Points).]