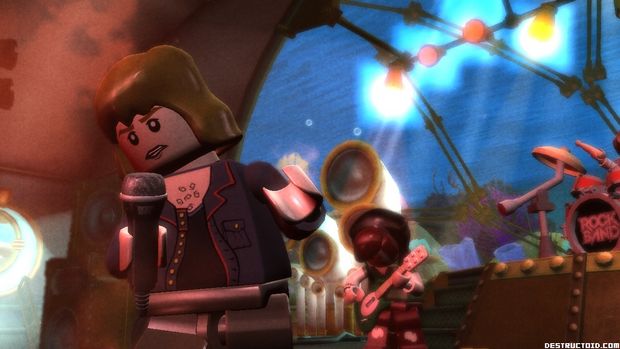 OK, so this is happening. Warner Bros. Interactive, TT Games, The LEGO Group, Harmonix, and MTV Games have all come together to announce — you guessed it — LEGO Rock Band.

Slated to hit Xbox 360, PlayStation 3, Wii, and Nintendo DS holiday 2009, LEGO Rock Band lets players “Build a Band and Rock the Universe.” How that’s going to work is a bit sketchy, but the press release says you’ll be able to build a mini-figure avatar, band, entourage, manager, and crew. And then it also goes on to say that LEGO Rock Band supports all existing Rock Band instruments, as well as other music game controllers. We assume this doesn’t apply to the Nintendo DS version, which will likely feature modified gameplay.

The game features a track listing more “suitable for younger audiences” including:

I’ll be the first to say “WTF?” to all of this, and I’ll also be the first to admit I’d rather just have all of those songs in existing Rock Band games as DLC. Yes, even the Pink song, which is a little ditty about getting screwed over by your ex-husband and then going on an irresponsible social rampage to spite him. Like they said, “suitable for younger audiences.”

Again, this is a real thing. Discuss.

BURBANK, Calif.–(BUSINESS WIRE)–Warner Bros. Interactive Entertainment and TT Games are joining forces with the LEGO Group, Harmonix and MTV Games, a part of Viacom’s MTV Networks (NYSE:VIA)(NYSE:VIA.B), to merge two of the most popular videogame franchises with the creation of LEGO® Rock Band®. The unique family-friendly music experience is currently in development by TT Games in partnership with Harmonix, and published by Warner Bros. Interactive Entertainment. The game, which will allow families, tweens and teens to experience a wild journey to rock stardom where they can “Build a Band and Rock the Universe,” will be available for the Xbox 360® video game and entertainment system from Microsoft, PLAYSTATION®3 computer entertainment system and Wii™ home videogame console. LEGO Rock Band for Nintendo DS™ will be co-developed by TT Games and Harmonix in partnership with Backbone Entertainment, a Foundation 9 Entertainment studio. All versions are scheduled for release holiday 2009.

LEGO Rock Band combines the multiplayer music experience of Rock Band® with the fun, customization and humor of the LEGO videogame franchise packed with brilliant chart-topping songs and classic favorites suitable for younger audiences, including:

Players will become rockers as they embark on a journey to stardom that the whole family can enjoy as they work their way through local venues, stadiums and fantasy locations on Earth and beyond that mimic the imaginative settings that the LEGO world offers. Also continuing the LEGO “build-and-play” gaming experience, players will be able to create their own LEGO Rock Band style as they customize their minifigure avatars, band and entourage, including roadies, managers and crew. LEGO Rock Band supports Rock Band instruments, as well as other music game controllers.

“LEGO Rock Band combines two compelling properties and creates an experience that family members of all ages will enjoy playing together as a group,” said Tom Stone, Managing Director, TT Games. “Harmonix and MTV Games are the world experts in music gameplay, and we’re genuinely thrilled to bring the unique and humor-filled LEGO experience to their Rock Band universe.”

“We’re thrilled to offer another LEGO branded gaming experience that will deliver humorous and social play for families and friends,” said Henrik Taudorf Lorensen, Vice President, the LEGO Group. “LEGO Rock Band is built around the same values of imagination and family-friendly creative role play that is present in other LEGO videogames. It will deliver innovative new elements of game play that complement the fun of the Rock Band experience.”

“Rock Band is a social game experience that crosses every generation and every genre of rock,” said Bob Picunko, Senior Vice President of Electronic Games for MTV Games. “Harmonix and MTV Games are big fans of the LEGO game franchise and excited to work with TT Games to develop a new take on Rock Band that focuses on great music and LEGO humor that’s fun for the whole family.”