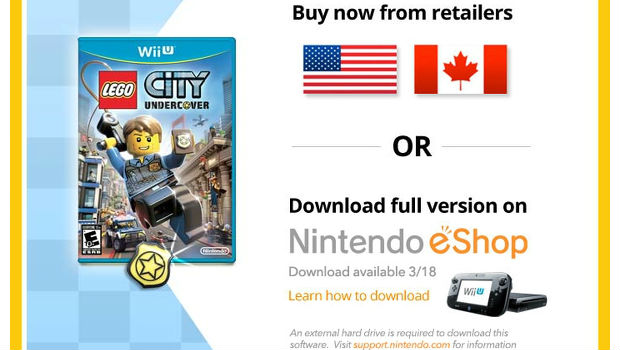 Nintendo already blundered the original Wii U in terms of hard drive space, as the system couldn’t even fit one of its major titles at launch without an external hard drive.

My issue is that although most of us know how to buy a cheap $50 HDD and simply plug it in, you’re alienating a ton of casual users who don’t partake in technology trends. This could have been alleviated with thumb drive support, which everyone has at this point, but Nintendo quietly states that you’re not supposed to use USB sticks on the Wii U, even though they technically work.

To add to the confusion, it looks like LEGO City Undercover will be launching with a last minute feature of its own — it will require an external hard drive to install the eShop version. Eurogamer reports that the game may run at around 22GB, which is near the full capacity of the 25GB allotted in the 32GB Premium Wii U model.

I’m playing through LEGO City Undercover right now, and just as Jim said, it’s a decent little charming adventure. I just feel bad for all the people who will want to download it on Monday, and have no idea why they can’t, with a completely clean hard drive.

It just seems…weird, when the other two older consoles can fit more than one digital retail game on their hardware out of the box.