Every IP in existence from Fable to Elder Scrolls to DOTA can get a card game these days, and in the face of adversity (read: mostly Hearthstone), fail. Others, like Ascension and Eternal, have carved out a nice little niche for themselves, co-existing in harmony.

But Legends of Runeterra is on a different wavelength by virtue of it launching with the full might of Riot Games behind it. I hope it sticks around. 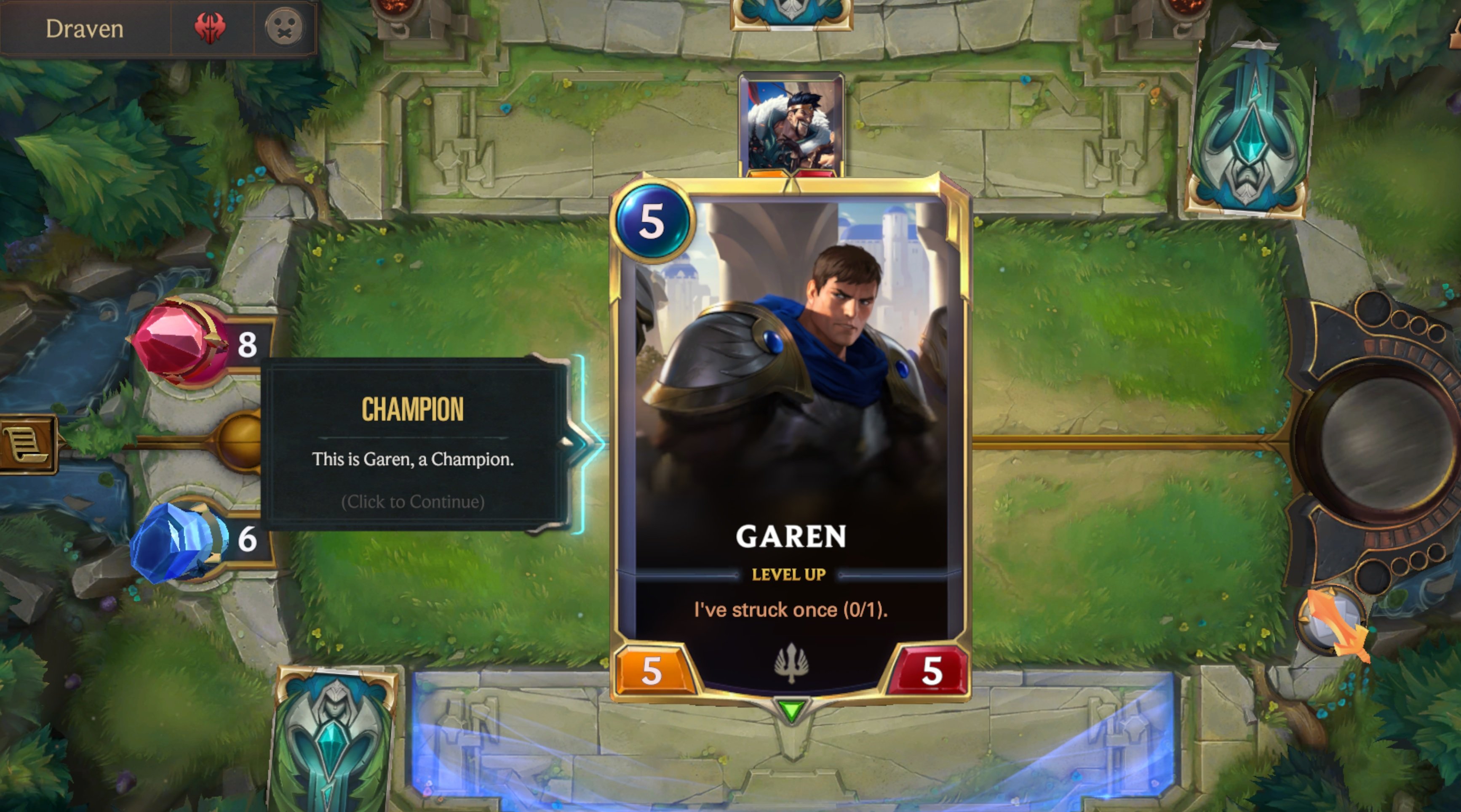 Legends of Runeterra derives its name from the very universe that League of Legends takes place in, and serves as a card game spinoff of that same franchise. Your job is to play cards in a 1v1 competitive fashion and defeat the enemy’s Nexus (base).

Cards generally have an attack and health rating (units) and heroes have level-up opportunities through fulfilling certain requirements and wacky powers (like Elise’s ability to create spiders when attacking). Turns progress as players commit units to attack or defend (an “attack token” is swapped to denote the altered tactical flow), then watch the turn play out until one Nexus falls. On a base level, of course.

You also have to account for all sorts of abilities, keywords (such as frostbite, which turns an enemy attack rating to zero for a turn), and mana costs for cards. Spells can make things pretty hectic, especially ones that can be played out of turn like burst. Players also can’t put down units when attacking or blocking, so managing your army and your card pool is important at all times. Some spells can even grant you an attack token out of nowhere. Think of it as a mix between Hearthstone‘s simplicity and Magic‘s complexity (with direct analogs to the latter, like the keyword “overwhelm” that’s just Runeterra‘s version of trample). Timing and unit placement matters. It’s also more interactive than Hearthstone, as you can cast instant-speed spells to muck up enemy plans on their initiative.

The presentation deserves a shoutout, too. There’s cute little voiced character interactions that fit within the playful framework of this spinoff card game. The animations are lovely, and there’s a booming, bold sound design that’ll be highly conducive to esport events. It also has the added benefit of Riot account integration, with linked League of Legends friendlist access. Riot is becoming a regular ‘ol Blizzard before our eyes.

Another important thing to touch on: the monetization model. Booster packs to help build up your 40-card decks (with a cap on six Champions, or heroes) are not for sale, though you can buy a limited amount of cards per week in the form of wildcards. This is the plan for now, as cosmetics like new boards (playing spaces) and pets try to pay the bills. It’s all pretty early yet, but so far there’s a lot of promise here.

The idea of capping purchases so whales can’t drop hundreds of dollars a month on the game is not investor-friendly, especially for card games that sustain themselves on said whales. I can’t see this working out long term as the limit is slowly raised, but I like the moxie of it (even if some of it is self-serving to try and avoid looming loot box legislation) and the attempt to do something different to steer away from blind packs. Who knows: maybe if loot boxes get off the legal hook and the game doesn’t make enough money, the floodgates will open.

Legends of Runeterra is currently in beta, and is scheduled to launch “in the first half of 2020” on PC and mobile devices. There will be no more account wipes or resets from this point on.