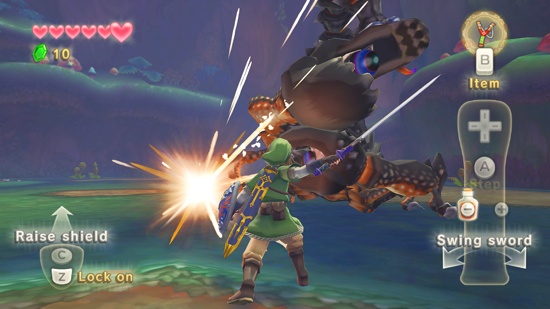 What’s it going to take to get more people interested in The Legend of Zelda: Skyward Sword? It’s already getting rave reviews, has a reported +100 of potential gameplay, and more new features than a Zelda game has seen in years. Still, that doesn’t seem to be enough to get certain disenchanted gamers interested. It certainly isn’t because the game lacks sky. Maybe it lacks rim? I’m not sure.

Well, Nintendo President Satoru Iwata isn’t going to take the situation lying down. He’s got a new interview up about the game to spread the word of its wonders, complete with a video featuring never before seen wonders. There is first person bug hunting, mushrooms, maps, and a giant muppet thing. Seriously, this behemoth is HUGE! It’s toes are about shoulder height on Link. And you can smack those toes around if you want! Smack ’em hard!