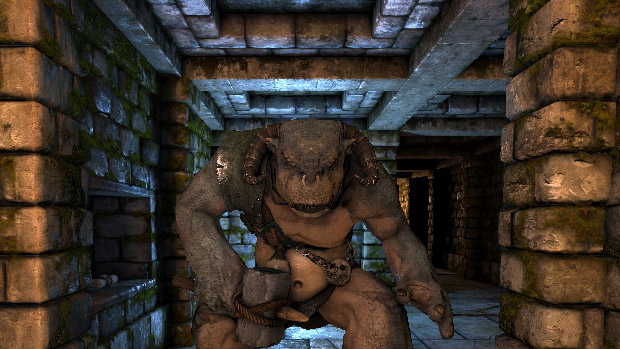 Legend of Grimrock took me by surprise. The old-school vibe with upgraded mechanics just meshed together so well. Yesterday’s blog post over on the official site outlined the game’s future content plans and succeeded to get me incredibly excited.

The game’s map editor is about to enter the alpha stage, a large milestone for Almost Human. You can follow the progress of the editor on their forums. Advanced scripting in the editor has changed from typing into a Lua code editor to a more graphical interface. This makes the editor way more user friendly, as placing an object into the map with the previous method “required entering the map coordinates manually in to the code.” As someone who loves to play with map editors, I’m glad they’re taking this new, easier approach.

Some sort of expansion-like project is also in the works, but they are remaining quiet about the details (those jerks). What they have said is they “already have a new themed wallset and two fearsome monsters in the pipeline.” I can’t wait to see this official content alongside what the community can do with the map editor, as I have been itching to jump into some more Grimrock-related content.

Next For Grimrock: Map Editor, Some Form Of Expansion [Rock, Paper, Shotgun]

Filed under... #Legend of Grimrock#Role-Playing Games