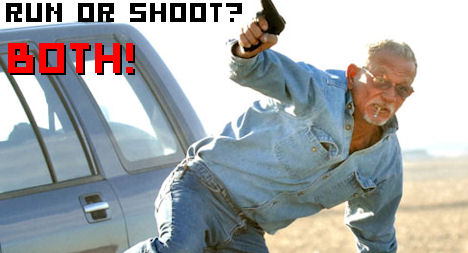 In shocking news, it has been discovered that Left 4 Dead star and lovable war veteran Bill has been taking his role as a post-apocalyptic zombie combatant a little too far. Perhaps to protect his identity, news outlets are referring to him as Robert Sylvester, but he is now in a critical condition after leading cops on a high speed chase and pulling a gun on them. Vietnam flashbacks, maybe?

“Sylvester” is suspected of robbing a Check n’ Go in Bloomington. After leaving with an undisclosed amount of cash, the suspect led police from the crime scene to Normal Community West High School in Normal, where he started waving his gun around. Naturally, he was shot.

Just in case you think this isn’t really Bill and we’ve simply decided to pick on some old criminal with a vague and passing resemblence to a videogame character, may I direct you to the photoshop artist’s conception provided by our tipster, Ernie. After seeing the helpful additions he was made to the above picture of “Sylvester,” I think his real identity will become clear.

Filed under... #halt criminal scum!#How is this a story?#Left 4 Dead