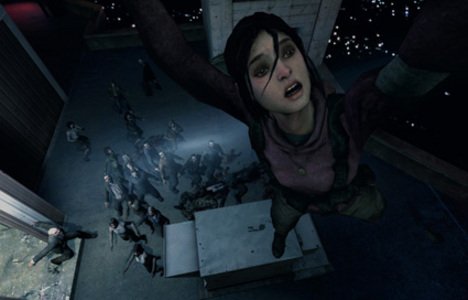 If you’re like me (and why wouldn’t you be), you love zombies. Everything about them, from their insatiable hunger, to their lack of superhuman ability, to the way they parallel the mediocrity of humankind is nothing short of awesome.

You’ll be happy to know, then, that left4dead411 has posted a hands-on preview of the game from which the site derives its name. If you haven’t been keeping up on your zombie-related news, Left 4 Dead is a cooperative multiplayer zombie game built on the Source engine. Four human survivors must battle their way through around twenty different maps whilst fighting off the sometimes-human-controlled, sometimes-not legions of the undead. And if the previewers are to be trusted, this looks to be one of the coolest multiplayer games of the year.

Hit the jump for a bit more info.

The preview only covers the Human experience (the Undead preview will be added later), but if the article is to be believed, Left 4 Dead definitely looks to be a game to watch. There’s an extreme emphasis on cooperativity, there’s an interesting achievement system that curtails potential TK’ing n00bs, and zombie rushes are controlled by an AI “director” instead of geologically placed script triggers.

Some of the co-op stuff they’ve devised seems really cool: when you reload, your character automatically yells that he or she is doing so, and when you spot a “boss” zombie (ranging from zombies that can throw cars to zombies that can vomit a pheremone that makes every other NPC zombie in the vicinity attack only you), your character automatically yells this info to the rest of the group. Not to mention you can revive fallen teammates, share health packs, etcetera.

Personally, I’m waiting for a true zombie game (slow zombies, a huge/nonlinear world, the ability to board up doors and windows, and an emphasis on strategy), but the previewers would have you believe that L4D is one of the most cinematic and exciting multiplayer titles made in the last decade. It’s not my dream zombie game, but (at the very least) it looks to be much more strategy-oriented that any undead game we’ve yet seen.

We’ve heard this song and dance of revolutionary gameplay and cooperatively designed levels before (though this time you could refer to it as the “groan and shuffle”), but if you’re a fan of the living dead, this is definitely a game to watch.