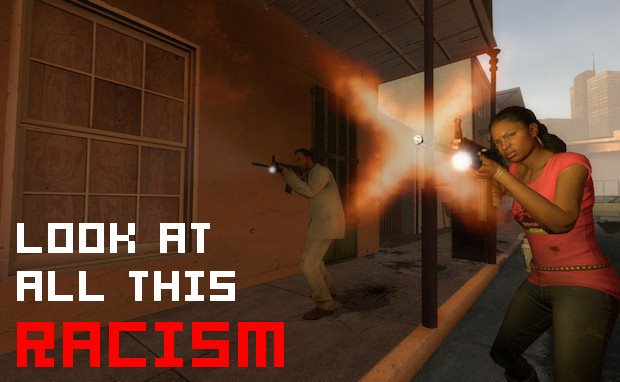 This is unbelievable. I’ve seen people try and find racist undertones in harmless entertainment before, but The Houston Chronicle‘s Willie Jefferson takes home the prize for making the most ridiculous and convoluted racism link in history. According to him, Left 4 Dead 2 is “disturbing” because “several” of the zombies are African-American. Yep, that’s right — you can’t even have ONE black zombie without somebody crying racism.

“I am disturbed by the growing trend of racist undertones that are cropping up in video games,” writes Jefferson. “One of the games that comes to mind is Left 4 Dead 2  … Set in New Orleans, players will have to fight their way through hordes of zombies – with several of them who appear to be African-Americans. When I saw the first trailer for the game, all I could think about was Hurricane Katrina and the aftermath.”

So let me get this straight … Valve is now wrong to include a single black zombie in the game? I literally cannot believe I just read that someone is upset over “several” black zombies — not an entire army of black ones, just several black ones amidst a bunch of white ones. Has society really gone so f*cking stupid that we can’t do anything anymore without the race card being played?

Jefferson also attacks Call of Juarez: Bound in Blood for daring to feature a Confederate officer as the main hero: “The Confederacy, as far as I am concerned, wanted to keep their cheap slave labor and the like. I can not stand the Confederate flag… To me, the flag represents hate — and offends me and many others to no end. [It] made me wonder how much research Ubisoft did for this game …”

I think society has really gone too far with these pathetic attempts to find racism in everything. When you’re saying L4D2 is racist because some black people happen to be IN it, and when you’re saying a game is racist for not automatically portraying every single Confederate soldier as a babyraping Nazi (which is, itself, a rather bigoted viewpoint), then you’ve lost your grip on reality.

Jefferson ought to be ashamed of himself for obscuring real issues of racism with this “cry wolf” nonsense.