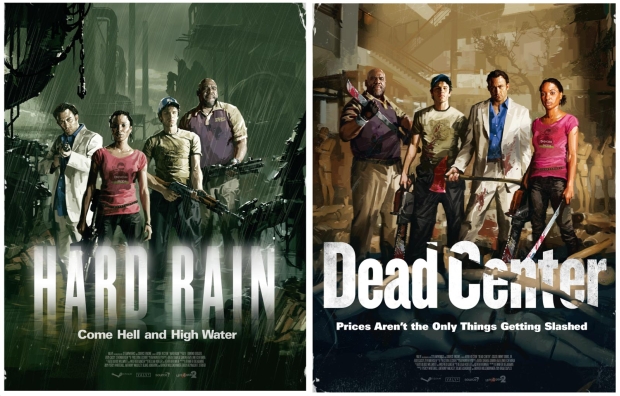 The Achievement list for Valve’s zombie-braining sequel Left 4 Dead 2 has been revealed, bringing with it verification of the yet-to-be-official campaigns, Hard Rain and Dead Center. The Achievements also make mention of brand new items, which I will now spoil for you all (so stop reading if you’re one of those “SPOILARZ” bitches).

First of all, there seems to be some sort of new weapon called the Boomer Bile Bomb. While no details are given, one would assume it works very similar to the Antlion pods in Half-Life 2, with Survivors throwing them to lure away the infected. A defibrillator is also mentioned — a new way to bring back lost allies?

STILL SOMETHING TO PROVE – 35
Survive all campaigns on Expert.

THE REAL DEAL – 35
Survive a campaign on Expert skill with Realism mode enabled.

CONFEDERACY OF CRUNCHES – 30
Finish a campaign using only melee weapons.

CLUB DEAD – 15
Use every melee weapon to kill Common Infected.

CHAIN OF COMMAND – 15
Kill 100 Common Infected with the chainsaw.

THE QUICK AND THE DEAD – 30
Revive 10 incapacitated Survivors while under the speed-boosting effects of adrenaline.

ARMORY OF ONE – 15
Deploy an ammo upgrade and have your team use it.

CRASS MENAGERIE – 30
Kill one of each Uncommon Infected.

DEAD IN THE WATER – 20
Kill 10 swampy Mudmen while they are in the water.

LEVEL A CHARGE – 15
Kill a Charger with a melee weapon while they are charging.

ACID REFLEX – 15
Kill a Spitter before she is able to spit.

A RIDE DENIED – 15
Kill a Jockey within 2 seconds of it jumping on a Survivor.

STACHE WHACKER – 15
Prove you are faster than Moustachio.

GONG SHOW – 15
Prove you are stronger than Moustachio.

WING AND A PRAYER – 30
Defend yourself at the crashed airliner without taking damage.

SOB STORY – 30
Navigate the sugar mill and reach the safe room without killing any Witches.

VIOLENCE IN SILENCE – 30
Navigate the impound lot and reach the cemetery safe room without tripping any
alarms.

BRIDGE OVER TREBLED SLAUGHTER – 30
Cross the bridge finale in less than three minutes.

HEARTWARMER – 20
In a Versus round, leave the saferoom to defibrillate a dead teammate.

STRENGTH IN NUMBERS – 15
Form a team and beat an enemy team in 4v4 Versus or Scavenge.

QUALIFIED RIDE – 15
As the Jockey, ride a Survivor for more than 12 seconds.

BACK IN THE SADDLE – 15
As the Jockey, ride the Survivors twice in a single life.

RODE HARD, PUT AWAY WET – 20
As the Jockey, ride a Survivor and steer them into a Spitter’s acid patch.

GREAT EXPECTORATIONS – 15
As the Spitter, hit every Survivor with a single acid patch.

A SPITTLE HELP FROM MY FRIENDS – 15
As the Spitter, spit on a Survivor being choked by a Smoker.

SCATTERING RAM – 20
As the Charger, bowl through the entire enemy team in a single charge.

MEAT TENDERIZER – 20
As the Charger, grab a Survivor and smash them into the ground for a solid 15 seconds.

LONG DISTANCE CARRIER – 15
As the Charger, grab a Survivor and carry them over 80 feet.

BEAT THE RUSH – 15
In a Survival round, get a medal only using melee weapons.

CACHE AND CARRY – 20
Collect – 15 gas cans in a single Scavenge round.

SCAVENGE HUNT – 15
Stop the enemy team from collecting any gas cans during a Scavenge round.

FUEL CRISIS – 15
Make a Survivor drop a gas can during overtime.

GAS SHORTAGE – 30
Cause 25 gas can drops as a Special Infected.