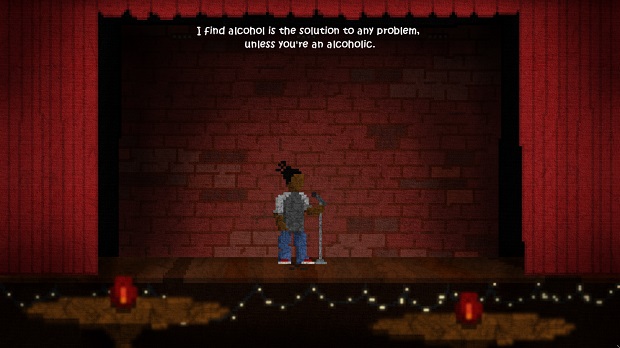 Are you going to die on-stage?

Comedy ain’t easy, especially in this medium, so a title that tries to game-ify creating a stand-up comedy routine sound a tad ambitious. Leave ’em Laughing from Australian developer Oscar Brittain is a mashup of adventure game elements with a procedurally generated comedy system.

Nelson is an aspiring comedian from Freemantle in Western Australia on an adventure to find his missing dad, which will provide great material for some jokes and this is where the procedural generation comes in. Each game will have a unique city location for Nelson to explore that will generate his joke list. How well he pieces together his gags, however, is up to you.

It’s an interesting concept, at least. Most games attempt humor and fail (Jazzpunk being the awesome exception) but it’s rare to see one focus on the creation of actual comedy. Of course, in the end someone is writing these jokes, so your mileage may vary.

At least it’s not me writing the gags. I’ve graduated to making “dad jokes” at the age of 34 without actually spawning any offspring.