It took me a while to play the original Assassin’s Creed after the game released. The good-but-not-great reviews coupled with gameplay that didn’t look interesting to my Super Mario Galaxy-obsessed self just made me not want to even try the game.

It wasn’t until Assassin’s Creed II came out that I finally decided to play the series. (Although that was due mostly to the fact that I worked for this very website and wanted to see what all the fuss was about.)

I thought the first game was one of the most repetitive videogames I had ever played in my entire life. Sure, the game looked nice, but I couldn’t get over the fact that it was an absolute chore to get through.

That was several years ago. Now, I love the Assassin’s Creed games. What the … ?!

Where it all started

As I mentioned, I was not a fan of the original Assassin’s Creed. Outside of being ridiculously repetitive — seriously, you perform the same missions over and over again — there was something about the game that just didn’t click with me. It was ambitious, but I wasn’t invested in anything I was doing. The first time I climbed a tall tower and looked over the city was exciting, but after doing this more than a dozen times I lost interest.

I liked the story of Assassin’s Creed and was intrigued about the parallel Desmond story, but even that confused me. It got to the point where I was questioning small details about the game instead of just enjoying it. How the heck does the Animus even work? When Altair assassinates someone, what strange world do he and his victim travel to? And why does time stop? And why does it take the targets minutes (and minutes of dramatic dialogue) to die? THEY JUST GOT STABBED IN THE NECK!

I love world history, though, so was invested enough in the time period and architecture that I forced myself to play through the entire experience. It was tough to get through the repetitive missions, but I wanted to see what would happen and what places Altair and Desmond would go.

Sadly, when the game finally ended, I didn’t describe my experience as “fun.” And, even worse, I had no idea what was going on. Who is Abstergo again? Do they have something to do with the Templars? Someone help me understand! 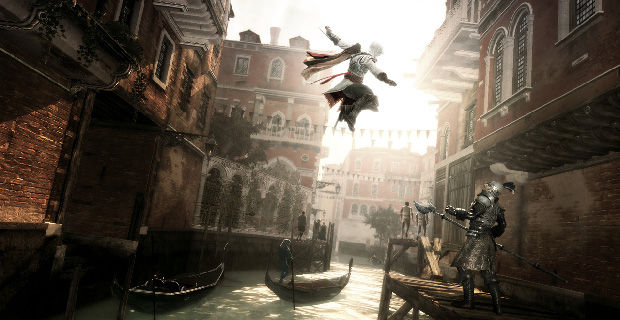 By the time my experience with the original game was over, Assassin’s Creed II was already out. Although we gave it a harsh review on Destructoid, I heard better things about the sequel and was curious to see how different the game was.

Because I am one of those people that always has to finish what he starts, I begrudgingly decided to give Assassin’s Creed II a chance.

Before the tutorial was even over something funny happened: I was really enjoying what I was playing.

Okay, I thought to myself: maybe this was just because I really love the Renaissance. Maybe I was so excited to play a game during such an influential and beautiful time period that I was looking past the gameplay and focusing on the art direction and basic aesthetics.

But that wasn’t it. I was actually enjoying the game, gameplay and all. And I liked it a lot!

To this day, I still consider Assassin’s Creed II one of the most improved sequels in videogame history. Technically, it shouldn’t really feel that improved at all. The game is still oddly broken up into alternating Desmond and assassin sequences, the main character is still tasked with going on various missions, and the locations — while geographically different — are similar to the ones found in the first game (cities with tall buildings, hooray!).

But everything is just so much better in Assassin’s Creed II. Controlling main character Ezio is more fluid. The missions have so much more variety. The collectibles are more enticing. The story has better pacing. The Desmond sequences are more involving. The voice acting is improved. And, most importantly, the entire game just feels more robust and polished.

Ubisoft set an interesting stage with the original Assassin’s Creed, but, for me, it was more of a test run. With Assassin’s Creed II, things started to fall into place. Everything the designers wanted to accomplish in the first game really came together in the sequel.

I was going to be the first person to write the game off, but ended up falling in love! A surprising turn of events. 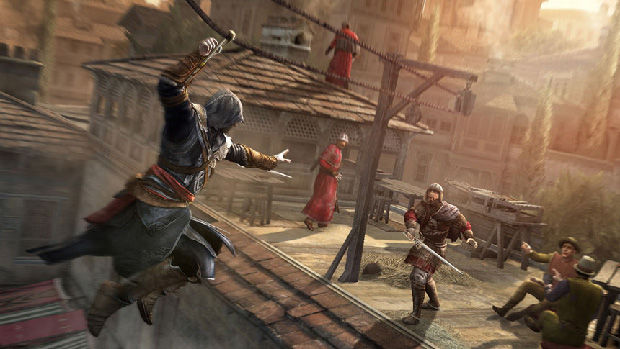 At this point — especially after not being a fan of the repetition of the first game — I should have walked away.

But I didn’t. And I haven’t! In fact, I loved Brotherhood and Revelations just as much as I loved Assassin’s Creed II. I loved the new locations, but that was a given — again, I love world history and geography. Even though the mini-sequels were modeled exactly like Assassin’s Creed II, the games still felt fresh and new to me.

True, I may have been tricked by all the pretty colors and period garb, but I guess I didn’t care. I was having fun!

In Brotherhood, I loved the assassin side-missions you could partake in (sending your assassin army to perform tasks in faraway locations). In Revelations, I even loved the unjustly hated tower defense sections.

No matter what the series tried, I was onboard. 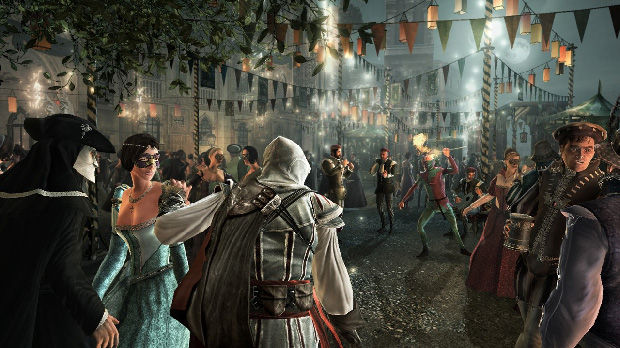 I SHOULDN’T LOVE THESE GAMES!

The more I think about it, the more I realize that I really shouldn’t love these games as much as I do. Despite their flashy appearances and addictive gameplay, there are some pretty major problems. The game glitches on occasion, the story is still super confusing to me (after four games!), and, my God, I don’t think I have ever cursed more than when I accidentally jump off the top of a building and die when I just wanted to jump down a couple of feet to a new platform. (Ugh.)

On the surface, these are games that I can understand liking, but not loving.

But there is something special about these Assassin’s Creed games. The unique premise combined with the genuinely interesting locales and time periods just tickle my fancy. Yes, they tickle my fancy!

I still love hearing that eagle’s cry when I synchronize a new location from the top of a high tower.

I love upgrading all of Ezio’s weapons and armors.

I love buying new buildings and making money every 20 minutes. (No joke, I get really excited when that deposit sound effect plays and I know a huge chunk of change is waiting for me in the bank.)

Heck, I love just sitting back and watching the beautifully animated in-game cutscenes unfold in front me.

I may not be able to pinpoint exactly why I now love the series so much, but I do. I really do.

There is a reason I was giddy with excitement when they announced the setting for Assassin’s Creed III.

I am now emotionally invested in a series that I never thought would ever win me over.

Are you excited about tomorrow’s release of Assassin’s Creed III?