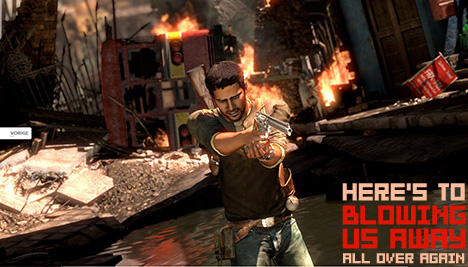 As I’ve said time and again, Uncharted: Drake’s Fortune was my favorite PS3 exclusive of 2007 (even though I spent more time with Warhawk). Part of the reason was its beautiful, lush environments, which remain, to this day, some of the best graphics I’ve ever seen on the PS3 — and for my money, they rival those of visually heralded 360 games like Gears of War. And that was only with “30 or 40 percent” of the PS3’s power!

This time around, Naughty Dog claims they’re getting close to using all of the console’s under-the-hood muscle, and boy, does it show in the Uncharted 2 screenshots and concept art that were leaked on NeoGAF. Like I said, I thought the original Uncharted looked awesome, but I was playing it on my relatively small (26″) HDTV. I recently saw the game at a friend’s house on his 40″ LCD, and I was simply blown away; it looked even better.

Reportedly, the teaser trailer shown at the Spike VGAs last night comprises in-game footage — in other words, it’s not CG — and after seeing it, the debut trailer, and these images, I’m convinced that Uncharted 2: Among Thieves is going to blow us away all over again when it launches next fall. Hit up the gallery for the images — there are twelve screenshots and eight pieces of concept art.