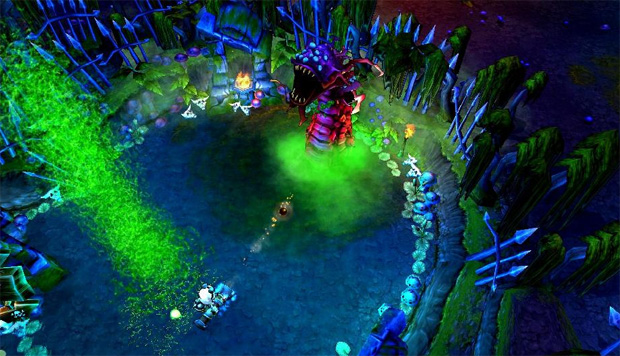 Here’s a piece of good news on the League of Legends front: the Defense of the Ancients-style game is launching in September as a free-to-play, microtransaction-supported PC title. This offer comes alongside a $29.99 Collector’s Pack which includes a few exclusive items and is headed for a retail release.

In order to, y’know, fund League of Legends, there are two types of in-game points. Influence Points can be acquired by simply playing the game, while Riot Points are purchased with real money — both types unlock “additional content customization options,” but only Influence Points affect actual character abilities.

Under such a system, dropping a bunch of cash won’t give you “a power advantage over other players,” which is the norm for seemingly all free-to-play games. I was fully prepared to buy LoL, so this is beyond good news for me. Great new(ish) trend in gaming, or greatest?

LOS ANGELES — July 14, 2009 — Riot Games, an independent developer and publisher of premium online video games, has unveiled the Summoner and currency systems for its highly anticipated online multiplayer session-based game League of Legends.   In a quest to make the title available to all gamers, and to support and reward a passionate community of competitive players, Riot has confirmed that League of Legends will be free.  Optional payment will enable additional virtual currency to be used within the Summoner system meta game for play diversity, customization and novelty.  League of Legends, which was nominated for the Game Critics Awards Best Strategy Game of E3, will be available for Windows PC in September 2009

“One of our goals at Riot has been to set a high quality bar for core games that are available for free online as we believe that a relentless focus on delivering tremendous value to online communities will earn player loyalty,”  Brandon Beck, co-founder and CEO, Riot Games, said.  “League of Legends is being built as a highly competitive core game that we believe will change many people’s minds about the type and caliber of games that can be offered for free.”

A player in League of Legends takes on the role of a Summoner – a gifted spell caster who has the power to bring forth a champion to fight as his or her avatar in Valoran’s Fields of Justice.  As the Summoner controls the champion in combat, it also influences the outcome of the match through the use of spells, masteries and runes.  Once a match is over, the Summoner gains Influence Points and Riot Points.

Influence Points will be earned by simply playing the game, while Riot Points will be available for purchase with real money.  Both currencies will be used to unlock additional content customization options, whereas only Influence Points will be used to unlock content such as Runes, which enhance the power of playable characters.  Gamers who spend money in the game will not have a power advantage over other players; they will have access to rare visual customization options.  The system is designed to empower the player with a huge number of mechanical choices that deepen the level of the strategic thinking in the game.

Riot Games will also offer a League of Legends Collector’s Pack that contains exclusive items, such as two unique Champion skins, as well as a number of Champions, Runes and Riot Points.  Players who pre-order the Collectors Pack at www.leagueoflegends.com or at retail outlets GameStop and Best Buy will also receive an exclusive Champion skin that will only be available with the pre-order.  The Collector’s Pack will retail for $29.99.

League of Legends combines elements of role-playing and strategy genres with addictive battle action that brings accessible, replayable and competitive gameplay into a whimsical universe that deepens with the player’s commitment.  Built by a veteran development team and the original creators of DotA Allstars, one of the world’s most popular player-made mods, League of Legends is a unique and genre bending experience.  The game will be operated as a live service that will be frequently updated with new features, Champions, maps and additional content as suggested by the community.

During each online multiplayer game session, players will choose from one of dozens unique Champions wielding diverse skills and abilities, and engage in fast-paced team-oriented combat to bring their foes to ruin.  Champions will gain levels, items and abilities that enable them to slay their opponents and augment the strength of their allies by battling with enemy minions, foul beasts, deadly turrets and enemy Champions.  Players will also advance their Summoner’s rank and power after each session to gain new abilities and items that assist their Champions in future battles.  At the maximum Summoner level, players will be on an even playing field from a power perspective.  League of Legends will offer endless permutations of builds, strategies and combinations that will make the game extremely competitive and interesting for those focused on competitive play.