Despite its tenacity in the past, Riot Games hasn’t added a lot of Champions to League of Legends‘ roster this year. You have Bard in March, Ekko in June, and now, Tahm Kench this month — that’s it.

Having said all that, all three have been great additions overall, and the fishy Kench is no exception. 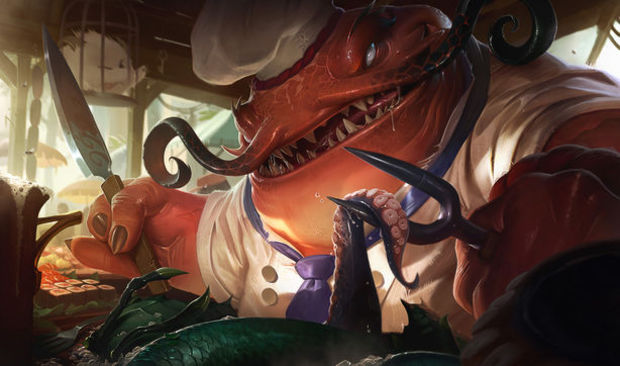 First off, his overall design is brilliant. He’s billed as a southern gentleman with an acquired taste, which works perfectly juxtaposed to his horrid visage. The character is hilarious, spouting out quotes like “I refuse to resign to culinary degradation” while devouring enemies whole, and his standard getup (as well as his chef skin) just work. It’s a good balance between absurdity and fitting within the confines of the League universe.

While a lot of depth lies under the surface, Kench is fairly easy to pick up, as he sports a skillshot tongue lash (Q), close-range devour (W), a passive/shield (E), and a straightforward (R) ultimate. By hitting an enemy with auto-attacks you can apply “acquired taste,” which buffs tongue lash (giving it a stun) or devour. Devour specifically requires you to apply three tacks of taste before gobbling an enemy Champion, forcing Tahm Kench to be more aggressive than most people may like. It’s also limited, as his movement speed is severely slowed while carrying an enemy — so you can’t instantly dive back to your own tower unless they’re really aggressive.

Stacks of acquired taste are shown very clearly with a fish-icon overlay, and applying a slowing debuff with tongue lash while chasing is a great way to gradually earn said stacks while an enemy is running away. Devouring enemy Champions doesn’t feel cheap, as it requires a bit of finesse to pull off, and again, you’re slowed as a result. His grey health regeneration passive can also be activated as a shield to deceptively increase his tankiness.

Kench’s ultimate allows for a certain degree of map control since he can instantly become a “hub,” so to speak, for another ally to click on. Reactivating said ultimate employs a swift means of transport to a target location in a large radial area. It’s really fun to find an enemy teleporting in plain sight on the map, ult over, and tongue lash them to prevent them from running off. Likewise, you can easily set up ganks at early levels by transporting carries in and allowing them to get a kill. It’s not instantaneous, though — it takes a few seconds to channel and you have a second or so of a delay after arrival.

One thing to note is that devour is a bit buggy at the moment. You’re supposed to be able to tongue lash into a devour, but it doesn’t work a good deal of the time. This (presumably temporary) limitation highlights the fact that if you want to play Tahm Kench at a high level, you need to work for it. Since he doesn’t do much damage, you need to complement your team more than a lot of other supports. With the right amount of communication, he can shine.

Playing Tahm Kench is probably the most fun I’ve had with League of Legends in months. He’s unique from a gameplay perspective, with a personality to boot, and I think that once people start getting the hang of him, he’ll be a viable pick in ranked play.