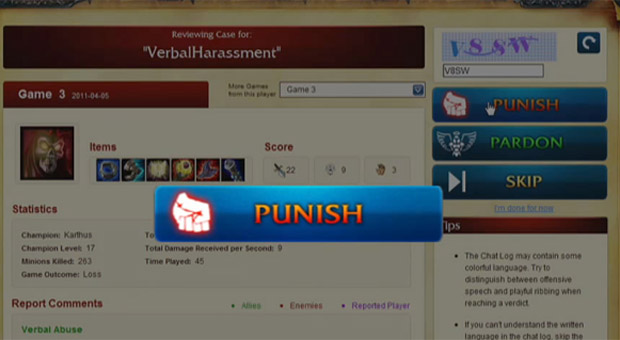 Riot Games’ massively popular League of Legends now has a Tribunal feature on its website, which lets the game’s community review cases of feeding, verbal harassment, and other things you might see people going nuts over.

As long as you are level 30 and haven’t been banned for leaving games before, you’ll be able to go over cases — including stats and a chatlog of a game in which a person has been widely reported — and judge it any way you like. It’s an interesting idea and given that you need to be high level to participate, one might say it could weed out the kids from the proper community judges. Then again, the LoL community seems to have a lot of level 30 kids in my experience, so we’ll see how this will work out in the end.

Judging cases also gives you Influence Points (the game’s in-game earnable currency) if you voted along the lines of the majority of community judges in any particular case. When a majority judges a player to be guilty of reported behavior, that player will be punished depending on things like repeat behavior and whatnot. Not all reports end up on the Tribunal, so if you are reported for feeding just because you suck (story of my life), then you shouldn’t worry about temporary bans too much.

Check out the entire FAQ if you want to know the full details.