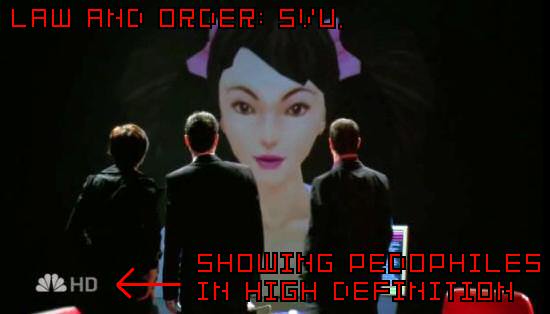 Last Sunday, Law and Order: SVU aired an episode called “Avatar“, which featured a Second Life-like game called Another Youniverse. In the episode, the detectives search for a missing woman who spent time playing out her sexual fantasies online in the game. They soon learn that another player had kidnapped her because her avatar looks like a 15-year-old girl that he raped and kidnapped in his youth and he wanted to relive that experience.

It’s not surprising that Law and Order has used videogames as a central theme in their plots. A lot of different movies and TV shows have included videogames in their story lines which is not surprising since technology has taken a front seat role in our society and it allows for new plots and new ways to strike fear into the hearts of the viewing public. Internet stalkers, videogame killers and cyber terrorists are just a few of the personalities that shows like CSI, Law and Order and other crime shows are using to boost their ratings and form new plots.

I like that crime dramas are opening their character and plot ideas to the world of videogames, but some are doing better than others in regards to realistic storylines. This Law and Order: SVU episode, “Avatar”, had a great plot line but had a few errors that any gamer would catch, such as a user creating a mod in-game that the creator of the game couldn’t delete or hack around it. I don’t think a game’s creator won’t be able to fix any unwanted mods in his own game. Just seems weird.

There are some other issues that seemed improbable at the time but could be easily explained if you are familiar with Second Life. For example, the kidnapper decides to go after victim based on the looks of her avatar and as we all know, games like World of Warcraft and Second Life only offer so many variations of the avatars which would make you wonder, why did he only go after the one player with that avatar? The answer is simple if you think about it.

The likelihood of the kidnapper only wanting one player with that specific avatar is hard to believe, but if you take into consideration that her avatar could be the only one offering sexual fantasies with an underage avatar to other users, then you can understand why the kidnapper chooses to go after that player specifically. Her actions played to his fantasies and his need to relive his previous raping.

From a moral standpoint, Law and Order: SVU has gone the informed route with their videogame episodes by not blaming the actions of the players on the games themselves. “Avatar” clearly shows that the kidnapper had previously kidnapped and raped a teenage girl long before he touched the videogame, and the game was only a device for finding his new victim. They at no point blame the videogame for his actions.

The other Law and Order: SVU videogame episode, “Game“, actually defended the whole “videogames aren’t the cause of violence” issue. The episode featured a Grand Theft Auto 3 type game that has scenes and game play similar to the murder of a woman in the real world. In the end, the killers claimed they believed they were still in the game when they killed the victim and that they couldn’t tell the difference between the real world and the game any more. The argues that if the jury finds the killers not guilty, then every killer in the world will be able to use the “video games made me do it” excuse. She then goes on to argue that everyone is responsible for their actions in the end and no amount of violent videogames can change that.

Can I just say… Best. Episode. Ever!

Sure, not every TV show is as smart as Law and Order. CSI: ran an episode called “Urban Hellraisers“, where gamers are reenacting levels from a videogame much like Grand Theft Auto 3 in order to win money from the game’s creator. This episode shows the game industry in a bad light by portraying a game designer as a money hungry criminal who will do anything to sell his game — even make gamers into real killers for publicity.

The writers at CSI: seem to relying on close-minded opinions and the general fear of the public to write their scripts. From terrorists to videogame killers, they’re writing about what soccer moms believe is a threat to their children, and it’s ignorant of them to do so. Law & Order: SVU has shown in many of their episodes to place the blame where blame is ,due and that justice isn’t always black and white; that there can be grey areas.

In one episode, a teenage boy murders his younger brother after his mother manipulates him into thinking that it’s the best way to save his brother from the abuse he’ll deal with in a foster home. In the end, the mother is put on trial for her actions and the son is released into the custody of his older, estranged brother. Murder isn’t always as clear cut as he did it, so he’s guilty and deserves to rot in jail. Law and Order shows that quite well in their stories.

I’ve actual become a huge fan of this specific Law and Order spin off due to its open-minded writing. The show’s characters are written like real human beings with morals and thoughts of their own. Viewers can really relate to them and that makes for great TV.