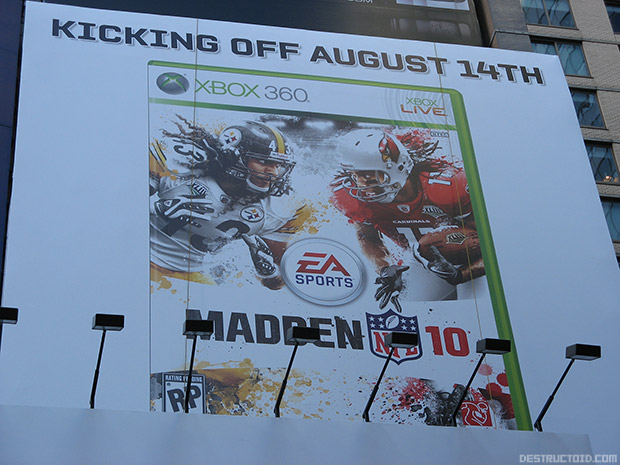 It’s a historic year for Madden: for the first time in the illustrious football franchise’s 21-year history, the cover will feature two athletes, Pittsburgh Steelers safety Troy Polamalu and Arizona Cardinals wide receiver Larry Fitzgerald. The theme for Madden NFL 10 is “Fight For Every Yard,” and that credo is certainly epitomized by these two men, who are, arguably, the best in the NFL at their respective positions.

Fitzgerald, a three-time All-Pro receiver, had a landmark season in 2008: he achieved career highs in receiving yards and touchdowns. But it was his extraordinary playoff performance — he obliterated Jerry Rice’s postseason records with 30 catches for 546 yards and 7 TDs — that cemented his status as the league’s top wideout. Fitzgerald is the second player to be featured on the covers of NCAA Football and Madden NFL (the first was Shaun Alexander).

On the defensive side of the ball, there’s no one in the NFL like Troy Polamalu. It seems like he’s everywhere on the field, and that’s why he’s the anchor for the Steelers’ top-ranked defense — as an offense, you simply have to be aware of him on every play. Polamalu racked up 73 tackles and seven interceptions in the 2008 regular season, leading the way to a Super Bowl XLIII victory for his second title.

The landmark cover was unveiled in Times Square this morning at approximately 8:20 AM EDT, and yours truly was in attendance to bring you some photos of the giant billboard that features the box art. Fitzgerald himself also showed up — apparently, he doesn’t play a lot of videogames, but Gears is one of the games he does enjoy. You can look through the photos of the event (note the large advertisement for another upcoming EA game, The Sims 3, right underneath the Madden cover — clever!), along with the Xbox 360 cover artwork itself, in the gallery below.

Madden NFL 10 will be out on Friday, August 14th, for the PlayStation 3, Xbox 360, Wii, PlayStation 2, and PlayStation Portable. Keep your eyes peeled for a first-look preview next Wednesday morning, April 29th.

[Update: We’ve now also got the PS3 box for you to gawk at!]

REDWOOD CITY, Calif.–Electronic Arts Inc. (NASDAQ:ERTS) announced today that Arizona Cardinals wide receiver Larry Fitzgerald and Pittsburgh Steelers safety Troy Polamalu will both be featured on the cover of Madden NFL 10, set to hit retail shelves on Friday, August 14. For the first time in the 21-year history of the Madden NFL franchise, two athletes will grace the cover of the award-winning football franchise. Leaders on their respective sides of the field, Fitzgerald and Polamalu epitomize the offensive and defensive battles that take place on every play in the NFL…the Fight for Every Yard.

“Larry Fitzgerald and Troy Polamalu are exemplary examples of the epic battle between offense and defense in the NFL,” said Sr. Product Manager Anthony Stevenson. “Madden NFL 10 showcases the Fight For Every Yard, and nobody fights harder than Troy and Larry, making them the perfect athletes to grace the cover.”

Larry Fitzgerald will be the second athlete to have been featured on both the Madden NFL cover (Madden NFL 10) and NCAA Football cover (NCAA Football 2005) the first being Shaun Alexander. The three-time Pro Bowl selection and 2009 Pro Bowl MVP reached career highs in reception yards (1,431) and touchdowns (12) in 2008, and set NFL post season records for yards (546), receptions (30), and TDs (7), as he led the Arizona Cardinals to Super Bowl XLIII. Fitzgerald’s athleticism and unyielding focus often result in acrobatic catches that change the course of a game.

Troy Polamalu is a 2-time Super Bowl Champion and one of the most recognizable players in the NFL today. Anchoring the Steelers’ vaunted defense, Polamalu frustrates opposing offenses with his All-Pro speed, agility and high-impact tackles. Known for his quick reactions on the field and unrivaled preparation off the field, Polamalu is one of the few defensive players in the NFL who can rush the quarterback, shutdown a receiver in man-to-man, or drop back into zone coverage; making it necessary for the offense to account for him on every single play. Sharing the NFL record for most sacks (3) in a single game by a safety, Polamalu also recorded seven interceptions and 73 total tackles during the Steelers Super Bowl XLIII championship season.

Utilizing the all-new Pro-Tak™ animation technology, Madden NFL 10 on the Xbox 360® and PLAYSTATION®3 ensures that the Fight for Every Yard doesn’t end until the whistle blows. This new game changing animation technology delivers steerable tackles, three to nine man gang tackles, as well as the ability to fight for fumbles at the bottom of a pile. In addition, Pro-Tak allows quarterbacks to avoid the oncoming rush to extend a play, or step into the pocket to deliver an in-stride pass. With Pro-Tak, the authenticity of NFL game days is brought home like never before in Madden NFL 10.

This year, Madden NFL 10 arrives on the Wii™ with breath-taking visuals that will captivate the entire family. Completely redesigned and built from the ground up, Madden NFL 10 introduces a unique art style that will define the look of sports games on the Wii. Bright new stadiums showcase details of NFL fields, plus all-new player models embody characteristics of your favorite athletes. Madden NFL 10 epitomizes what fun looks like on the Wii, delivering the most social and dynamic experience from the franchise to date. Get together with friends and crown a “King of the Couch” during your pre-game tailgate party or during halftime. Quick, exciting game modes ensure that anytime is the right time for Madden NFL 10 on the Wii.