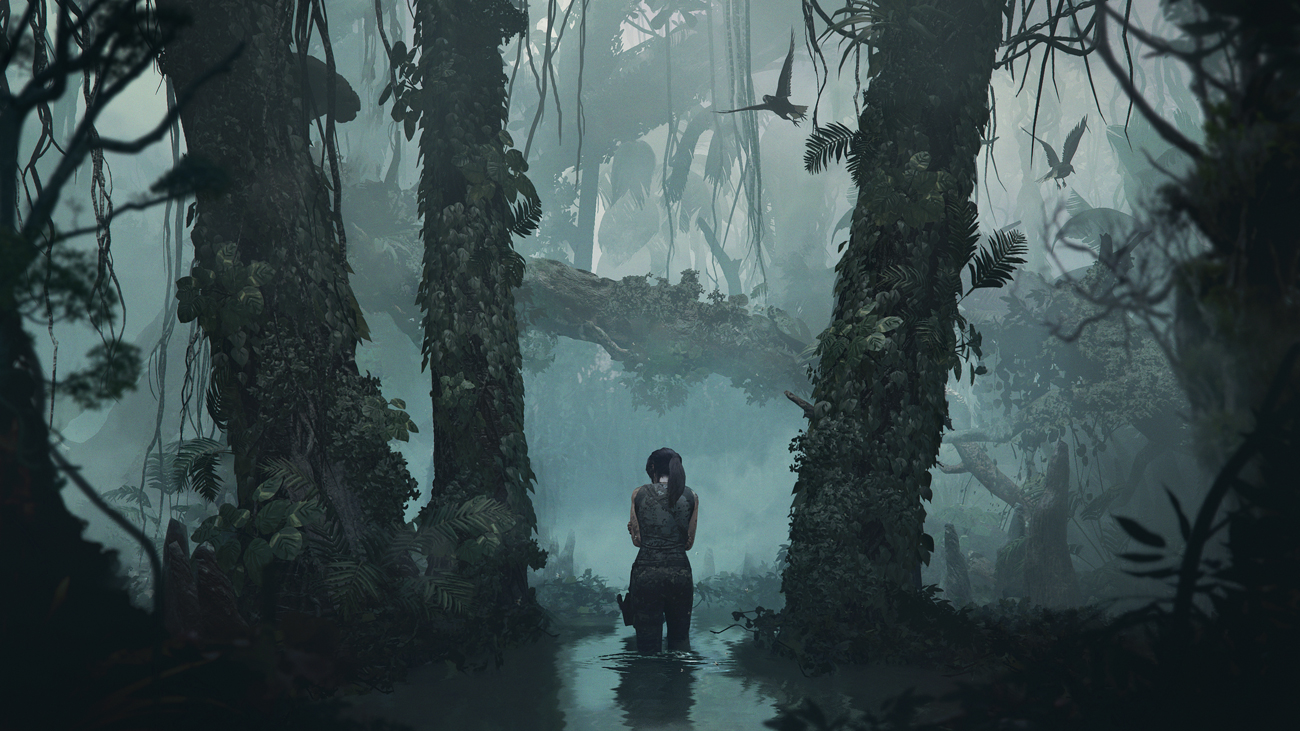 One of the many facets of art direction I’ve come to greatly appreciate in this generation of gaming is that of the vista. I simply love a good vista, the moments where a break in the action gives players the opportunity to gawk at the panoramic terrain artists have created. Our current consortium of consoles has given us some absolutely sumptuous scenery. The look at Hyrule from the beginning of Breath of the Wild, the magnificent plains of The Forbidden Lands of Shadow of the Colossus, the fjords of God of War; these games and more have provided us with jaw-droppingly gorgeous landscapes that stand toe-to-toe with masterpieces like “The Wanderer Above the Sea of Fog,” “The Oxbow,” and other revered works of art. A transcendent vista is the easiest way to put a smile on my face, and during a recent hands-on session with Shadow of the Tomb Raider, I couldn’t help but grin time and time again.

In a hotel room in downtown San Francisco, I sat down with a preview build of the game taking me through the second location players will explore when it launches next month. The first, Mexico, was previewed back in April when the game was officially announced. My hands-on picks up where that one left off, with Lara and Jonah aboard an ill-fated flight to the jungles of Peru. They’re searching for a silver box said to be the key to an ancient prophecy. A storm with golf-ball-sized hail downs the aircraft, separating the two associates – something that will be a theme of my time in the preview.

When Lara comes to, she does so in an absolutely opulent South American jungle. The landscape is strikingly handsome and in the many moments when I come across a massive vista rife with rich, green chaparral as far as the eye can see, I stop pan the camera around taking it all in. Shadow of the Tomb Raider is a femme fatale: beautiful to behold but secretly plotting my demise with every step I take.

Or it can be a walk in the park. Earlier this week, Square Enix dropped the curtain on one of the game’s more fascinating mechanisms with its highly adjustable difficulty settings. Players will be able to personalize how challenging they want three aspects to be: combat, exploration, and puzzles. There will also be an “immersion mode” that changes ancillary character dialogue to their native tongue. This wasn’t available for my demo, and let me say it’s quite the immersion breaker when I walk into a remote Peruvian village and have everyone talk to me like they’re employees at Cracker Barrel.

For the sake of the demo, I choose the normal difficulty setting across the board. After playing through the Mexico stage at the insistence of Square Enix PR, I begin my trek through the jungles of Peru. At the start of this area, Lara is in survival mode. Much like the beginning of any given Metroid title, the fallout from the plane crash has left her without her requisite set of tools. Unlike any given Metroid title, it’s only about 20 minutes before Lara’s fully armed and dangerous once more.

The path through the jungle is a linear one, chalk full of views I consistently stop to take in. Lara’s movements are fluid. Her actions feel second nature, the controls like a natural extension of my appendages, and I don’t skip a beat jumping from cliff to cliff, climbing a massive rock wall, or diving deep into treacherous bodies of water with their repetitive eel quick-time events. When I stumble into a den, hunted by two massive leopards that probably ate my pilot not too long ago, I don’t really have much issue defeating them with some well-placed arrows to the face. Everything about this game is smartly designed in a way that pulls me into the experience only to push me out with some immersion-breaking designs.

This may sound odd, but parts of this game are too game-like for their own good. Some of the elements of play here don’t necessarily fit in with the world created. I come across one such instance early in Peru. Before I’m the badass bitch I’ll be for the remainder of the preview, I have to cut down my supplies that are stuck in a tree. Because I don’t have my knife, a makeshift propeller blade from my downed aircraft will have to do. I get the blade, but it’s not sharp enough to cut the rope holding up my supplies. In order to get them down, I need to find three pieces of crafting materials to sharpen my blade.

All of this makes sense in a video game sort of way. I’d rather have one simple crafting material for many of my upgradable supplies than too many to keep track of. Finding the three necessary pieces is a snap. I thought that would be enough, that my blade would be sharpened, but no. It took me a minute or two to realize I had to return to the campfire I’d leveled Lara up at before and craft my new blade there.

It feels like a concept that exists solely because this is a game and games are expected to have game-like mechanics. Limiting crafting to choice spots on the map makes sense in a video game, but it acts against the sense of immersion Shadow of the Tomb Raider was able to pull off thus far. I may be making a mountain out of a molehill here as the sharpening of the blade is only a brief moment in time, but it’s the point where I see the wilds of Peru as less of a living world for me to explore and more of a series of short video game challenges to complete.

The pedestrian eel fights, the strategically placed air pockets in the extended underwater sections, the convenient moments where Lara and Jonah are brought together only to be split up again; none of them really add much to the adventure other than giving me a consistent feeling of déjà vu. Thankfully, these small moments are the only ones that project that feeling. Most of the game is astoundingly fresh and I particularly love the puzzle designs of the massive tombs.

I explore several small caves and tombs during my preview, but the best is near the end in a section called the Trial of the Eagle. It pulls up the rear of several shorter climbing sections that all, in their own way, prepared me for this. I have to climb my way up this ancient contraption built with clocklike precision. Making my way to the top is a test of my timing, cognitive thinking skills, precision with my bow, and hand-eye coordination. It’s everything a Tomb Raider puzzle should be.

The combat too is extremely fluid though, at times on the normal setting, laughably simple. Lara’s ability to blend into with the vines and shrubbery doesn’t quite reach a cartoon level of ridiculousness, but it’s often a stone’s throw away from becoming a parody of the stealth genre. Firefights break out occasionally, but striking from the shadows is the preferred method of this apex predator. The lead up to release has pegged Lara as a woman at the top of her game in Shadow of the Tomb Raider, actively hunting down those who oppose her. In the early hours, her particular set of skills feels wasted on man and beast, but there is another predator out there in the jungle that may be able to give Lara the type of challenge she’s been building towards over her past two adventures.

The preview build ends right as I enter Paititi, the massive hub world for the game and one last vista to wet my whistle. I get a glimpse at the world map before the picture fades to black, checking out the many optional tombs I’ll be able to raid in the final product. Everything from my time in this hands-on session points to another winner in this rebooted franchise, with the graphics, controls, and pacing of the story hitting all the western AAA game development checkmarks. Square Enix is giving players a great deal of leeway with how they want to play the game, but if you’re like me, you’ll be playing in immersion mode with the difficulty cranked up right off the bat.

Shadow of the Tomb Raider launches September 14 for PlayStation 4, Xbox One, and PC.