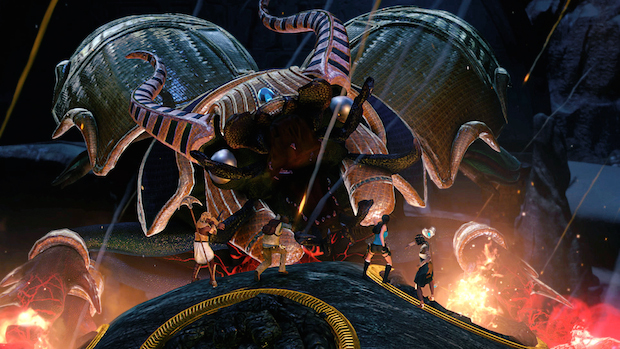 The OTHER Tomb Raider title

Crystal Dynamics has another Lara Croft game. Square Enix just announced another: Lara Croft and the Temple of Osiris, a four-player cooperative follow-up to Lara Croft and the Guardian of Light. It is coming to PS4, Xbox One, and PC. We don’t have a solid release timeframe yet.

“After the immensely positive reception we received for our debut co-op adventure  Lara Croft and the Guardian of Light, we always hoped that we would find the time for Lara to return in another classic AAA digital arcade title,” said Darrell Gallagher, Head of Product Development and Western Studios.

“We are excited to expand upon Guardian of Light’s legacy with an entirely new adventure, and challenged ourselves to create fun new ways to play. Four-player co-op in Lara’s world combined with Crystal Dynamics’ high production values are being brought to a new generation of platforms and we are excited for more friends to share in the adventure together.”

You’ll play as Lara and her new archaeologist friend, Carter Bell. Also playable are Egyptian figures Horus and Isis, both armed with god powers. They’ll team up to go against evil god Set and fight the elements of nature.