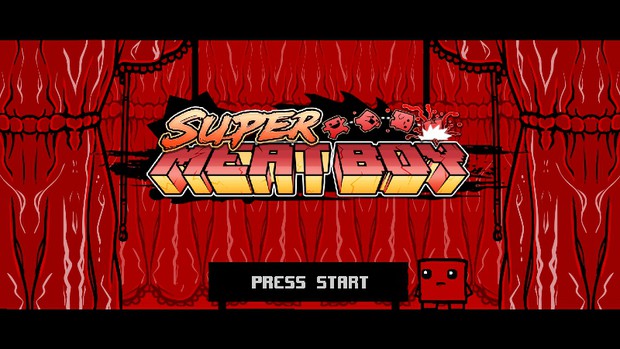 [Last week, I asked you to tell me about a moment in your gaming career that really made you work hard. Today, bbain tells us a great story about how difficult it was to unlock The Kid in Super Meat Boy. I understand his struggle — I couldn’t even beat the first level of that section. Want to see your own work on our front page? Write a blog on our current topic, Relaxation, before Monday. — JRo]

My favorite games tend to be ones that are quite difficult. Beating them requires a lot of dedication and patience. I expect my games to be tough and challenging rather than a cake walk; something that I have to work hard at to overcome. Those are the most fulfilling gaming experiences for me, as I actually feel that I’ve accomplished something upon beating them.

Possibly my proudest video game accomplishment would have to be completing Super Meat Boy. Actually, I haven’t yet gotten every achievement, but for all intents and purposes, I feel that I’ve completed the game.

I started off going through the game at a relatively easy pace. Some levels gave me quite a bit of trouble, and I racked up a hefty number of deaths, but soon I’d gotten through most of the game to the Rapture levels. I tried playing a few Dark World levels from some of the earlier worlds, but a lot of them were pretty intense, so I decided to just focus on beating the Light World first. I’d also unlocked all of the hidden level characters up to this point, so I figured I would just get the last one and then beat the Light World and everything would be fine and dandy. And that’s when I was introduced to The Kid’s level.

What in God’s name is this?

Just looking at the level was like a punch in the face. It looked impossible, even with The Kid’s special ability which allowed him to double jump. I could see the path that you were supposed to take, jumping from wall to wall, so I tried jumping in a few times to see what I could do. I died almost immediately about 10-20 times in a row, without making it to the first wall space even once. I then left the level and thought to myself, “Well, screw that! I’d never be able to do that!” I figured only the most hardcore gamers, who are able to pull off ridiculous moves that I couldn’t even fathom, were the only people who would be able to beat it. So I stopped trying.

I figured then that I would just beat the game on Light World and that would be enough of an accomplishment for me. Even doing that was no easy task though. A lot of the Rapture levels were exceptionally difficult, what with all the disappearing platforms and enemies that follow you around everywhere. And the six End levels were even more taxing. I beat the first one without much trouble, but the next four took quite a bit of work. I had to come back to the second level after I’d beaten the next two, because it was giving me the most trouble. I was terrible at staying on those small platforms that you had to make huge leaps to get to, constantly sliding off the other end to my death. The fifth level took me the longest to beat, but I managed it eventually and unlocked the final boss level.

Ok, so just kind of… jump through there somehow…

Finally I was on the last level, and goddamn it took me a long time to beat. Eventually I did beat it, and saw Dr. Fetus fall to his death, and I rejoiced! And then suddenly there was a second part to the level, as I now had to carry Bandage Girl out of the crumbling fortress, and this part was even harder than the first part! I just had to keep on going, because I knew I was almost done, and after many, many deaths I managed to escape safely. I’d finally beaten Super Meat Boy, and it felt wonderful!

I was quite proud of my accomplishment, but there was still plenty left to do in the game. I wasn’t sure how much of it I would actually be able to do, since just beating the game once was hard enough. I decided I probably wasn’t going to bother with the intimidating Cotton Alley levels after I tried a few of them and failed miserably.

But I figured I would give some of the Dark World levels a try, so I started through the Forest Dark World and began making my way through all of the Dark Worlds of the game. All of the effort that I put into beating the later levels of the Light World was definitely helping me get through the earlier Dark World levels with relative ease, even though they had seemed exceptionally daunting when I’d checked them out before. I now felt very confident in my abilities. Even when a particularly difficult level would come along and give me some trouble, I knew that I would be able to beat it eventually if I kept on trying.

I went back through the game, collecting all of the bandages to unlock more characters, and got stuck with only a few more bandages left to collect. The first warp zone level in The Rapture (Skyscraper) was causing me some major problems. I could barely get past the first stage, let alone beat all three stages and collect both of the bandages with only three lives! The first bandage was particularly frustrating because in order to reach it you basically had to beat the level twice in one go. I stopped trying to beat that stage for awhile.

Oh god, why is it raining saw blades?!

At this point, I only had a few things left to do. I still had to beat that warp zone and get the last remaining bandages, beat The Kid’s level, and beat most of Cotton Alley (Light and Dark Worlds). All of these tasks seemed pretty impossible. Since I was tired of trying the warp zone, and I wasn’t progressing any further in Cotton Alley, I decided to give The Kid’s level another shot, although I had no intention of actually beating it.

I had gotten much better at the game since my previous attempt, and this time I was actually able to get about halfway up the second column of spikes. I kept jumping in, getting further and further through the level every once in a while. The third and fourth columns of spikes were particularly tricky, trying to fall down the third one in a straight line and then jumping up the fourth one which was a tighter fit than the second column. Eventually, I somehow managed to make it to the space right above Bandage Girl, and my heart skipped a beat. I ran and told my roommate about the progress I’d made (as he’d been watching me play the level for awhile) and he came in to watch me beat the level. I hesitated to make the jump, but I finally got up the courage, and I took one step and jumped directly into the spikes in front of me.

It took me a while longer, but eventually I got back to that point and managed to get to the last space directly in front of Bandage Girl. She was just a jump away, so I made the leap and I DIED ON THE LAST FREAKING SPIKE RIGHT IN FRONT OF HER. For the love of…!

I somehow calmed myself down and kept going, and eventually I finally reached her and beat the damn level! I celebrated, and could hardly believe I’d done it! Of course, each warp zone consists of three stages, so there were two more stages to beat before I could lay claim to The Kid. I tried the second stage for awhile, but couldn’t manage to make it down the second moving platform without dying, so I stopped playing and turned in for the night, but left the game on to save my progress.

Unfortunately, my computer decided it wanted to restart in the middle of the night, so the next day I found that I had to start all over from the first stage. This really bummed me out, and I stopped playing the game for about a week.

Once I started playing again, I was determined to unlock The Kid. It took me awhile to beat the first stage again, maybe about an hour or so, and I was able to beat the second stage in about an hour as well. I took a short break to get some food, and then got to work on the final stage. It was proving to be quite difficult, what with the super fast walls of spikes hurtling towards you at all times, but after a while I got a pretty good pattern down. Suddenly, with a lot of luck I’m sure, I managed to jump over the walls of spikes on the top floor just enough times to be able to make a leap for Bandage Girl before the next wall appeared, and I did it! After nearly four hours of playing his godforsaken level, The Kid was finally mine! My heart was about ready to beat out of my chest, and my toes were cramping up from being clenched for so long, and I could hardly believe I’d actually beaten The Kid’s infamously difficult level!

Now I felt like I could do anything! I soon managed to beat the Skyscraper warp zone that was giving me trouble before and collected the last of the bandages, unlocking Mr. Minecraft. I then got to work on Cotton Alley, the last thing I needed to beat. A lot of these levels are crazy difficult, and the last Light World level especially gave me some problems, but I soon managed to beat every Cotton Alley Light World level and only had a few more Dark World levels left to beat. Level 7-13x (Bleach) ended up being the last level I needed to beat. The rising bleach or whatever it is was always too quick for me and killed me every time, but I kept at it and soon enough I managed to beat it, completing the game!

That’s a lot of bleach!

Afterwards, I went on to get an A+ on every single level and even managed to obtain a few of the super hard No Death achievements (six of them, to be exact). I don’t think I’ll ever get all of the No Death achievements (beat the Cotton Alley Dark World without dying? Are you kidding me?) but who knows. I made it this far after all, despite thinking I would never be capable of doing it when I first started. Anything is possible with enough dedication and practice, and I thank Super Meat Boy for teaching me that!