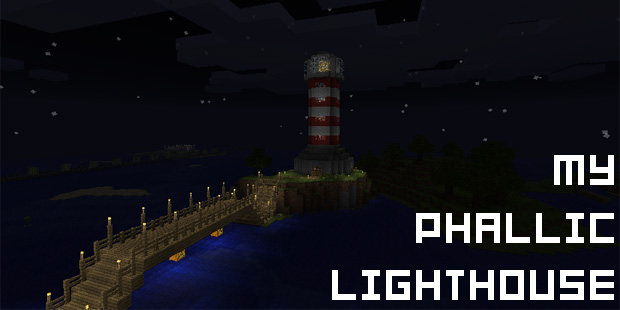 [Last week, I asked you to tell me about a moment in your gaming career that really made you work hard. Today’s promoted blog on that topic is from Ross, who explains all of the work he’s put into Minecraft and how it almost feels like a (really fun) job. Want to see your own work on our front page? Write a blog on our current topic: Relaxation. — JRo]

Minecraft is an amazing game. I’m sure you all know the concept: a world is generated out of blocks and you can move those blocks around. Sure, you can craft tools and work with redstone (and make infinitely creative designs within that), too – but the main feature of the game is simple enough. Minecraft takes “Easy to learn, hard to master” to another level with the crazily varying degrees of simplicity and complexity.

Minecraft is also the hardest boss I – along with hundreds of thousands of others – have ever had.

It works you like a dog, demanding all you have: endless hours of shifts (which in a real job would probably be illegal), impossibly ambitious projects (come on, all Minecraft players have thought of building a Death Star), even eating up our home-lives: restless nights laying awake thinking of those sweet, sweet, blocks; all the work that could be achieved right now. And what do you get for it all? Nothing tactile, nothing functional: just pure fun.

The game tasks you with filling several roles – each, which in normal circumstances, would require a set of dedicated set of experts for the job.

First you must design your project. Be it a quaint house, a dominating castle, or a giant phallic lighthouse – it must be planned. This may take many painstaking hours of poring over blueprints, or maybe just a vague daydream in class or “work” (“You call this work? I play Minecraft”). Whatever the method, the result will be the same. Time will be wasted and an idea will surface.

The next step is the most laborious: mining. Resources will be needed for the aforementioned project and – most likely – lots of them. And with lots of resources needed, lots of hours will needed to be sacrificed to your computer and the endless, endless mining.

Many varieties of materials will also be needed (that is, if you take your job seriously) – not all of which can be simply obtained through simply hitting blocks. You have to work for this.

Not many jobs require employees to rip a hole through the world, venture into Hell, fill up a bag with bloody, crumbling stone and leap back through the void. Nor do many jobs require an employee to mush flowers together, search miles and miles for sheep, rub said sheep with said mushed flowers and either trim them or punch them to death for their wool. All the while being chased by vicious, and often suicidal, beasts.

But you must do these things if you want to work for Minecraft.

With the donkey work out of the way, and chests filled with produce, the real work begins. The building. This is often the most frustrating part in our line of work. Sometimes things don’t quite look right and warrant being redone, other times impromptu appearances from Creepers will ruin everything (for at least ten minutes). It’s a risky business, too: builders may fall from scaffolding, lava may meet wood, TNT may be just a little too explosive.

Of course when that’s all said and done, and you’re standing triumphantly in front of your project the real thing, you can take a nice easy breather … for all of five minutes. Once the creative and manual labour aspect has been finished, the job takes another twist: full-time security guard and caretaker. Yes, once the blood, sweat and tears of building the bloody thing is finished, you’re obliged to babysit it; fearing all will go to waste if it’s destroyed. You must always be on hand to fix its bumps and bruises, as a parent would for their child (plasters take on a distinctly dirt block-like appearance, though).

I feel myself – and probably many others – constantly repeating this cycle in Minecraft and it never gets old. It seems like there’s so much work there, so much effort, but it’s still as fresh as when I first played it. The weirdest thing about the cycle is that Minecraft never explicitly says to do it, but so many people still follow it. It’s like we all have some innate urge to create and impress when we’re presented with a box of Lego or a sandbox. We want to fill the roles in the cycle.

I do, though. And I’ve never worked so hard in a videogame.