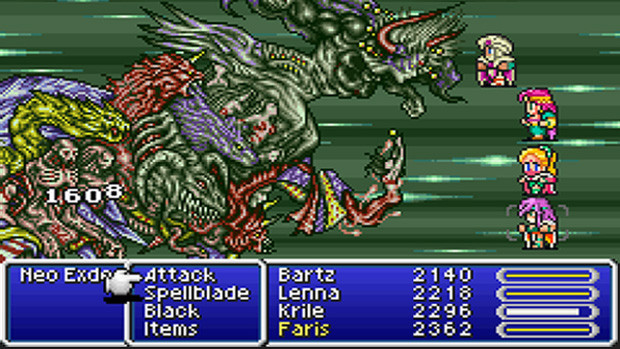 [Last week, I asked you to tell me about a moment in your gaming career that really made you work hard. Our first promoted blog on that topic is from Revuhlooshun, who tells us about his struggles with the boss fights of Final Fantasy V. Want to see your own work on our front page? Make sure you write a blog on our current topic: Relaxation. — JRo]

A lot of people argue on for days about which is the hardest Final Fantasy game in the nearly 25 year old franchise. This is a stupid argument, because the answer is V – seriously, it shouldn’t even be debated. And it’s not necessarily an “I’m going to pull my hair out!!!” Demon’s Souls kind of hard (although the game’s difficulty is somewhat overrated, since there are unfortunately a number of ways to cheese the system). FFV manages to bust your balls constantly, making the entire thing a hassle. There are no parts where the game peaks, then dies down and eases up: the game is just hard.

Now if you play the game with a guide, it’s not that bad. But that’s obvious and true with any game, now isn’t it? Play it without a guide, and there’ll be many times where you win fights with only one character left. I’m not even exaggerating: I can’t count the number of times I was saved by my lone Dragoon, jumping over attacks with Haste as the only man alive. This is because Final Fantasy V’s bosses are clever and intricate.

And this is exemplified by the boss man himself, Neo Exdeath. Get a great look at him, because he is a destroyer of controllers.

Now, my personal favorites in the series are XII, V, and IX, in that order. No, that’s not a typo. If I’d have to say which is the best game, I’d pick VII, just for the amount of stuff there is to do. In terms of difficulty, it’s V. IV and III have some pretty killer enemies, but they’re usually overpowered and kill you with brute force; or, in III’s case, they starve you of items like Phoenix Downs. I is pretty hard, but I is an annoying, lazy hard. If you were to take out all sense of direction from the rest of the games, they’d be just as hard, if not harder. A typical conversation in Final Fantasy I goes like this:

“Help us! You must help us! Defeat the Wizard and his Dragon Wyrm, and put a rest to this evil!”
“Alright. Sure. Where is he?”
“Well, uh…just…kinda go around to all the towns and talk to everyone again, until you find some new dialogue.”

Final Fantasy V is a clever hard. It not only requires a lot of grinding and knowledge of its expansive class system, but the bosses you face are not your standard issue.

There’s a boss called Atomos, which is essentially a giant black hole that spams Comet on your entire team until someone dies. Once a party member is dead, their corpse is slowly dragged into it, inch by inch, and they are eventually removed from battle. Your immediate thought is: “Thank god that asshole stopped spamming Comet!” followed by “Uh, is that thing trying to eat my White Mage?”

So you revive them, only for it to start up again. Christ! Now depending on one’s learning curve, you may do this another two or three times (maybe 5 or 6 for the slower among us) before you realize that this bastard isn’t going to stop smashing your party into the ground until he eats someone. This then turns into a mad dash to kill him before he devours the rest of your team one by one.

And it’s throughout the game: You have a cave where you earn gil for every step you take, but it’s filled with Gil Turtles that’ll eat your team alive if you’re not fully prepared; high level Skulleaters lay mixed with level 1 Nutkins that hit like a truck with the evasion of a fly, but only have 1 HP; the debut fight with the mimic Gogo, who can either be beaten through a grueling, insane contest, or by not fighting him at all while you’re drowning underwater, timer included.

And then there’s Neo Exdeath, the greatest douche of them all.

I probably spent a good three or four hours straight trying to beat him. Now, I play all Final Fantasy games the same way: I don’t grind, but I also don’t run from many fights. I level up with the natural pace of the game, which also allows me to fairly judge the different titles. FFV itself has a higher level demand than its counterparts to begin with, which is then kicked through the roof by the time you enter the final dungeon. So, suffice to say: at level 37, I wasn’t exactly at an optimal fighting level – though I rarely am in these games. This is partially because I find it more enjoyable than being level 70 and wiping the floor with everything in my path.

Oh, and to get to the dude is itself a pain in the ass: You have to make your way through seven dimensions, including a multi-layered castle, fighting a string of bosses just to enter the final dungeon, which itself has three or four levels to it. If you want to leave to get some items, perhaps an Elixir or two, you walk your happy ass back to the beginning.

It’s also very easy to run into the game’s two optional Superbosses on the way by mistake (one is hidden in a treasure chest, in a level filled with them), allowing them to promptly send you to your last save point. You can also skip Neo Exdeath entirely by berserking his first form (which is a giant tree), but then you don’t have the satisfaction of really being able to say you beat the guy, or the game itself really.

The thing with Neo Exdeath that easily makes him the hardest end boss of any Final Fantasy game is that he has four parts to him. This sounds trite and trivial, seeing as there are a lot of final bosses with multiple parts to them. The problem is that every part on its own can put you through the wringer, let alone when they’re all alive and kicking. I’m not talking about “Oh, he has two arms that each slap you now and then.”

His head beats you across the face and dispels. His tail can dispel, cast magic, and kill and/or petrify a team member. His hand drops Holy-infused bombs called Almagest on the entire party. Last but not least, his shoulder inflicts random status ailments on the entire party, including petrify and death. They each have around 40,000+ HP a piece, for an overall total of 220,000.

It took a lot of deaths, and a lot of practicing how to access spells as quick as possible (Active ATB, or you’re not really playing). A lot of times, the fight simply boiled down to whether or not I could get off crucial spells before pain was brought. I began focusing on single body parts, instead of trying to kill them all at once as I learned which parts were in charge of which actions. I spent an hour farming Dragon Lances for my Dragoon, and leveling up his Ninja job so he could hold two of them while he jumped to drive agony into the deadliest portion of his body.

It was a grueling fight, soured by a pile of losses prior. Ailments crippled me in storms of poison and plague, the people around me falling to their death cast in stone and rock. This in turn ate up more valuable time and MP – if they had only just died! My Samurai would lash out in multiple attacks, only to strike random body parts which took no damage at all, wasting a turn that could have been spent on something else.

Back and forth, the attack and the retreat, the frantic healing and reviving, the urgent need to get Blink or Golem Wall up to protect everybody, to re-haste the people that had died in order to keep up with the pace of battle before lashing out again.

Every second, every ominous music change or taunt, the same thought: Is this where it ends? Is this the move that turns this fight into the last one? Am I going to survive what he’s about to drop down on me? Is this the part I go out for another cigarette? Is my cat trying to climb the door frame?

Until one part dies. There goes the shoulder, no more status ailments. Then the hand. Now we’ve got some room to breathe. We got this. Finally, I can put this game to rest. Then the back goes. I did it. All of this paid off. Grinding jobs and abilities, farming these spears…I did it. And I did it the way I wanted.

Then he pulls a Karl Vreski at the end of Die Hard: His head, the last, living segment, starts spamming Meteor in a last hurrah.

One after another. Little meteors falling, burying my victory. Then the numbers spring up, the damage being done to my party, none of which top even 1,800 HP.

No…no. I wasn’t expecting this. I wasn’t even prepared for this. I’ve never seen this thing even cast magic before! Good god…Cat, not now.

I sit there, in disbelief. Then:

…Why is the music still on? Why is the game still running?

By sheer, pure, unadulterated luck, each Meteor landed on the same exact character, only taking out one of them. The rest proceeded to cut him to pieces in an all out attack. It was go big or go home at that point, kill or be killed. Finally, his defeat, his corpse soon dissolving into dust and the universe merging back into one piece. Time resumed as normal.

I watched the credits. Every second of them. I sat in my chair and stared at the endless sea of stars rushing at me after them, the words “THE END” fixed in the middle of the screen. The adrenaline poured out of my body, and my breathing picked up after holding it for so long. I took the disc out and put it back in its case, now assured that I could lay it to rest.

What’s the hardest thing I’ve done with a game? Not throwing Final Fantasy V out the window.