[Our final promoted blog this week for our Labor Day topic is from AwesomeExMachina, who put a lot of blood and sweat (and maybe a couple tears) into playing Dance Dance Revolution. If you want to see your own work on the front page, you still have all weekend to write something on our current topic. A new topic will be posted Monday afternoon. — JRo]

If I were to be profiled strictly by what games top my most-played lists, I’d certainly make the PR team at any major studio blush. Like most gamers, I buy into the big, marketable series with epic, sweeping stories. Even the indie games I play have a common theme of destruction, whether I’m Minecrafting or Castle Crashing. But there lies a dark secret within my history as a gamer. A particular talent I had honed as a young arcade nerd and hide from the light of day. I’m a Dance Dance Revolution aficionado.

I mean it. I was an ultimate, heavy-difficulty-setting, double-pad-spinning, arrow-burner. Or, at least, I was in my prime. A time when my high school friends and I prowled arcades and played endlessly, fueled by Mountain Dew and determination. Despite a life of burying myself in games full of narrative fuss, with the possible exception of a brief Dynasty Warriors obsession, my friends and I found ourselves latched to the classic arcade staple with the flashing techno strobes and the light-up dance pads. My labor was Dance Dance Revolution.

It was at the arcade that our practice came into play, where we would pretend to casually toss a few tokens in. This was a complete façade. We could play for free at home. The arcade was where you came to demonstrate your superiority over the others, which usually consisted of a long-haired guy in raver pants and a quiet Asian girl from the next school district. It was there the high scores were solemnly etched in stone. Where one player had played the perfect game and others tried vainly to knock them off their pedestal. The mall arcade was where it mattered. That is, until it was renovated on account of the poor income and quietly turned into a Cinnabon.

Our haven had been destroyed mid-year, but it turned out not all had been lost. Dance Dance Revolution was too much of a money-maker and so it was placed in the oddest place of them all. Smack dab in the middle of the massive, circular food court. Now wedged between a Sbarro’s and a Subway was our precious DDR Mix 3. It was a startling change, as the game’s audience was no longer Arby’s employees on break waiting for their turn, but the entire population of the mall. Parents, kids, other teenagers all walked past, with very few of them even knowing what the machine was for. Alone it blipped and flashed, beckoning impotently for players to ‘blaze up their feet.’ 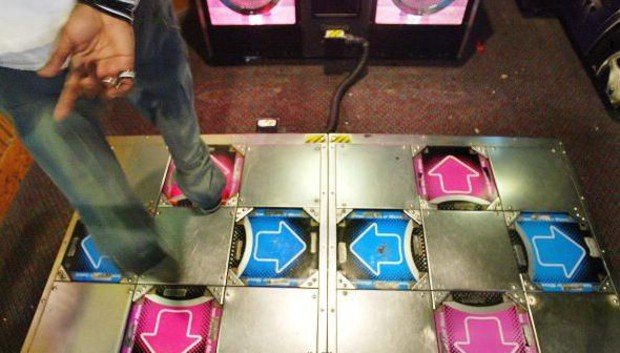 Eventually, we ignored the impending weight of potential public humiliation and answered the call. We began to play our afternoon sessions in the full view of near two hundred people. No longer did we play endlessly to chase a high score, because that number, no matter how high, didn’t impress strangers. Instead, a player who could nail a song with real, genuine rhythm and impressive moves drew a huge crowd. People gathered and stared, some with confusion and derision, others with genuine interest. This became the new competition. To make the masses curiously shake their head and watch you flail your arms like an idiot to bad techno.

My ability to do a backwards pad cross on AM-3P is probably ancient history now. I’ve scarcely even seen a Dance Dance Revolution machine in years. Every now and then one appears in the back of a movie theatre arcade or in a lonely minigolf course lobby. I amuse my girlfriend with the remnants of a skill I had honed through sweat and dedication, a period of tireless work that actually had beefed up my calves and caused me to drop 25 pounds by accident.

My one-time obsession seems ludicrous now, something that had caused me to faint in front of near 20 people and had once given me a minor ankle sprain. I never entered a competition, even at my prime. I wasn’t intimidated by the concept, just wholly disinterested in it. Yes, it was a game of competition and high-scoring, but that wasn’t something to be judged. We did it as a silent challenge to each other and because, pointless or not, it was a talent we had crafted.

I imagine exceptional players of any genre, those that practice their techniques in Street Fighter or Halo, battle a slight inclination of shame when discussing their passion with strangers. There is something inherently negative in our culture about becoming good at something not everyone cares about. The tale of one Alyssa comes to mind. No where is it more relevant than in video games, a medium that requires work, effort, and resilience to failure. Games are a hobby that inherently grant the particpant a skill, however marketable, simply by taking part. But, working towards a displayable talent is never wasted time. It’s achievement simply by making you feel as if you’ve achieved. Shame is never a part of it.