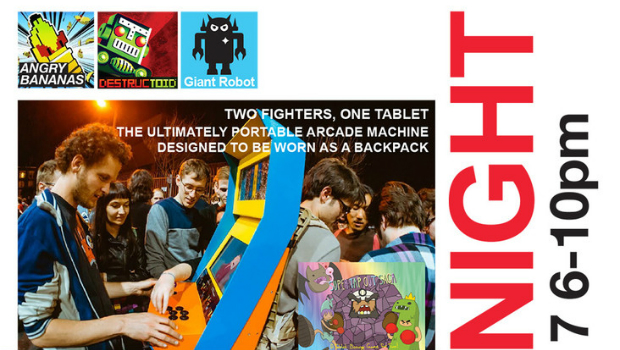 Dtoid has once again partnered with our friends at Giant Robot and Angry Bananas to bring you another Game Night!

When: February 7, from 6pm to 10pm
Where: Giant Robot 2, 2062 Sawtelle Blvd LA, CA 90025
What: Three awesome indie games on display, plus a panel discussion with the developers at 8pm!

Read on for full details on the games we’ll be playing!

The Ultimately portable arcade machine designed to be worn as a backpack! Two Fighters, One Tablet is a physical fighting game for two players. Tap your opponent’s character to punch them. Shove the device to shove the characters in game. Don’t get punched!

Paperbound is Smash Bros on crack. Be a gravity ninja as you battle your friends inside old storybooks. Run up walls and on ceilings, and then invert your gravity for a surprise attack. It’s chaotic yet strategic. Sometimes, it’s madness. Sometimes, it’s a cat-and-mouse game. You’ll laugh. You’ll swear at your friends. You’ll want to play another round.

In Paperbound, you play as stick men and other characters who come to life via magic dust. Inside Journey to the Center of the Earth, you discover the ability to have your gravity adapt to any curved surface as you run along it. What better way to test this newfound ability than combat?

We’ll be having a Paperbound tournament with prizes!

This February, Indie Game Developer Pringo Dingo Games brings the tumultuous relationship of celebrities and paparazzi to the comfort of your own home with their debut game Paparazzi!

Paparazzi is a two-player local multiplayer game of cat-and-mouse. The celebrity runs, dashes, and hides while the paparazzi tries to take constant photos of them. It’s a simple yet competitive arcade-action game with a Where’s Waldo feel. It’s a test of focus and reflexes and a silly take on celebrity culture!