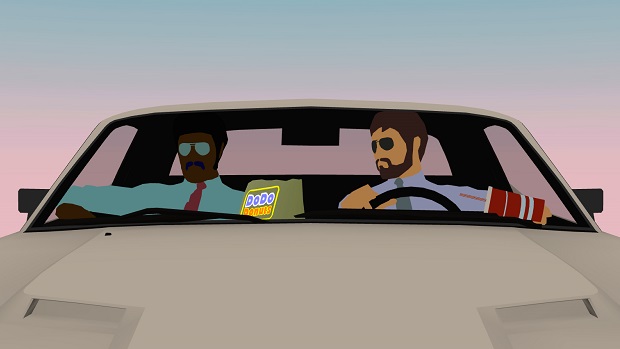 Bringing a game that’s early in development to a show like EGX is both a good idea and a scary one. You can get plenty of helpful feedback and some comments that aren’t so helpful. “Yeah, we had this kid who was like eight years old tell us the game was too easy,” LA Cops designer and coder Helana Santos told me. Considering I’d gotten both my cops killed in a simple hostage situation in a doughnut shop, I felt pretty useless.

Mind you, it would help if I’d used a lot of the tactical options that LA Cops make available. You control a pair of snappily dressed ’70s cops and must shoot your way through some buildings in order to arrest or take down lots of criminals, depending on how Dirty Harry you want to get. While it’s a single-player game, you’ll need to make use of both of your cops to succeed; whatever cop you’re not controlling will provide cover fire and shoot any enemy that wanders into his/her vision cone. That’s great for covering doorways and corners.

Holding in the middle mouse button will tell an AI cop to move to a certain point and this really opens up the tactical aspect. Of course, you can play it as a straight-up action game, going all John Woo and bursting through the doors, guns blazing. More often that not, that ends up meaning you take a bullet to the face, so it’s not advised. LA Cops is out right now on Steam Early Access and Helana said that there had been great feedback from the EGX crowd.

The team at Modern Dream was looking at putting in a more robust tutorial that really explained how important the tactical side of the game was, and also a possible revive/heal system to allow you to aid a downed partner. Right now, if you lose a cop, that’s them gone from that level. Such a shame — he only had one more day until retirement…