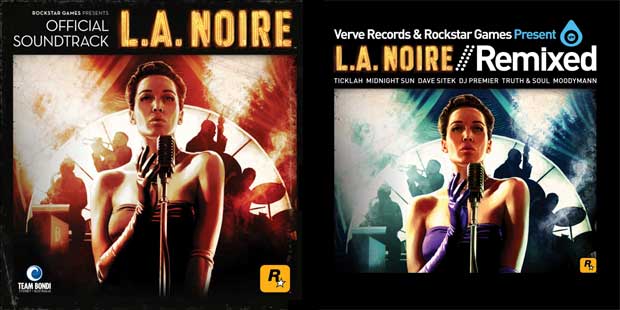 Rockstar Games highly-anticipated L.A. Noire is out this month, and along with it, music fans can expect two album releases.

L.A. Noire: Remixed is a partnership with Verve Records with modern spins on some of the classic tunes from the 40s. The six track EP will feature jazz standers “re-interpreted” by folks like DJ Premiere and Dave Sitek.

The game’s score, by The Getaway composer Andrew Hale, will also be available as a separate release. In addition to music heard in the game, it will feature modern-style updates of classic period pieces written by The Real Tuesday Weld’s Stephen Coats with Propaganda’s Claudia Brucken on vocals. Red Dead Redemption co-composer Woody Jackson also provides additional music for the game’s score.

Both albums will be available for purchase on iTunes on May 17, the same day L.A. Noire hits shelves.