What would that be? A salamander with fears of intimacy?

Being a connoisseur of garbage, I’m sometimes asked what I consider to be the worst game of all time. I can’t answer that. Not only have I not played every game in existence, but there are also a lot of metrics you can go by to define the worst game. Is it the game that mystified me with blatantly bad design choices? Perhaps it’s a disappointing sequel to a good game? Perhaps, the most broken or plainly unfinished one? Maybe it’s extraordinarily offensive? The most mind-crushingly boring?

To me, the last category is the worst because I can’t crack them. You couldn’t pay me to play through Dash Galaxy in the Alien Asylum, but that doesn’t mean it’s the worst game ever, it’s just so staggeringly mundane that it’s torturous for me to play. I’d rather be locked in a waiting room for hours without my phone. 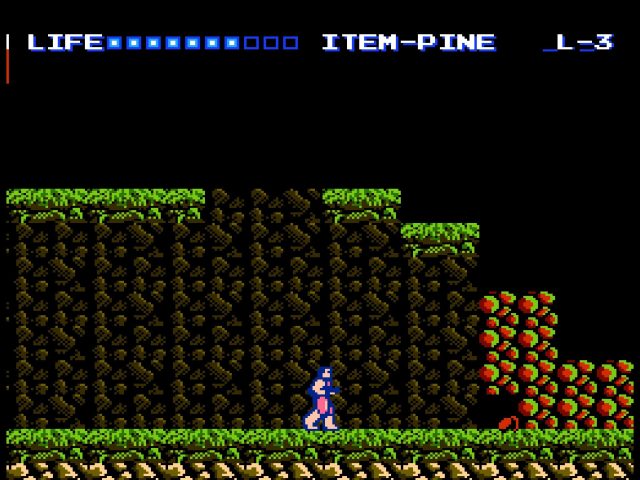 Technically, Predator was first released on the MSX, where it was already not great. It also landed on other contemporary home computers like the ZX Spectrum and Commodore 64, where it was completely different.

The NES version is also pretty different than the MSX. The MSX couldn’t really do scrolling like the NES could, so it had flip screens. The levels were completely different as a result, even bordering on competently designed on the MSX. Also, Dutch wears blue on the MSX where instead, bafflingly, he wears pink on the NES. I’m pretty certain Arnold Schwarzeneggar doesn’t need to prove his masculinity by wearing man-safe colors, but I also know that he wasn’t so fabulous in the movie.

You start off without any weapons and the inability to punch while crouching. The game makes you very aware of this by starting you next to a crawling enemy that you can’t hit. It’s putting its best foot forward saying, “Get used to this, you’re in for a ride.” Then, it further demonstrates this by giving you a grenade and an impassable wall that can’t be destroyed by grenade alone. This is where you learn that there’s a suicide button that allows you to restart a level once it’s thoroughly screwed you. 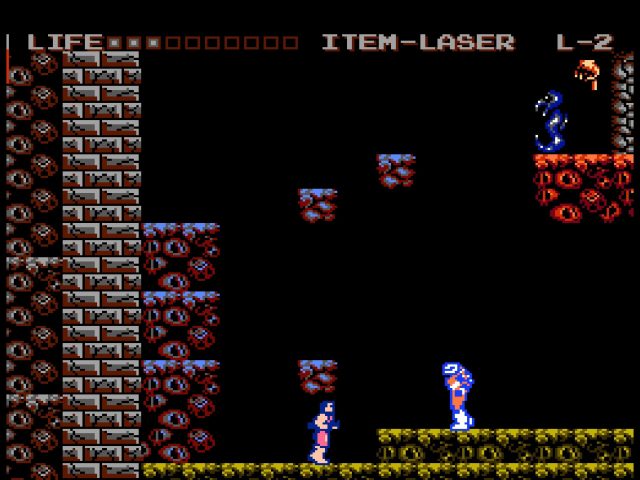 The game mostly fits in the mystifying category. Not just because the level design is so lazy that they added a suicide button instead of just ensuring you can’t get stuck, but that’s a good example of it. The whole game is just designed like nobody gave a fuck. Level 3, for example, is just this blue cave and you start on a bunch of steps. In any normal platformer, the blue rocks would be impassable walls, but really, you can just step through them and die. This teaches you to not trust Predator. A good lesson.

The film was largely just about Arnold Schwarzeneggar versus an alien after his team proved themselves useless. It’s sort of like Alien but without the subtext. So, you might wonder how this translates into an NES game, and the answer, as it often is in Predator, is just, “yeah, whatever.”

They just threw in bad guys, and technically, they fight bad guys at the beginning of the movie, but they’re just human bad guys. There are aliens thrown into the mix, and I hate to spoil the movie for you, but it wasn’t about an invasion. So, okay, that’s just how it was in the ‘80s. You needed to contrive some sort of danger.

The Predator does show up at the end of every few stages for a really stupid slapfight. This is where you learn that there are no checkpoints. If you die fighting the Predator, it’s back to the start of the level. Luckily, the fight is always the same and really predictable, so just don’t biff it. 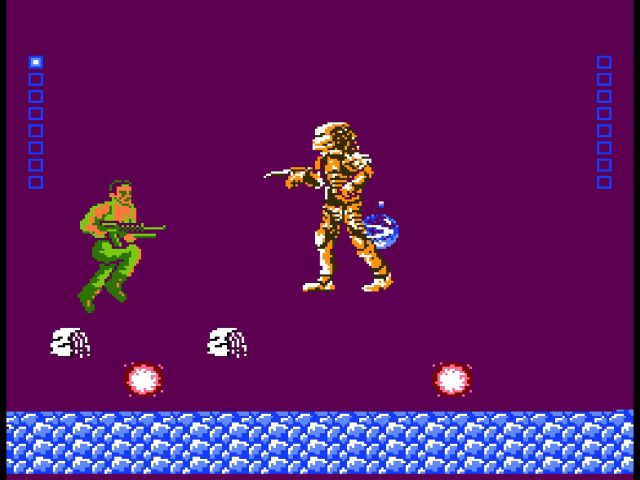 Then there’s Big Mode, which wasn’t in the MSX version. Here, Dutch changes into a green outfit, so he’s not camouflaged against the pink background. The sprite changes to be a fifth of the screen tall, and the level scrolls automatically. Your job is to fumble around trying to hit targets and not get hit yourself. Then it’s another fight against a more different Predator that throws Predator heads at you. Yeah, whatever.

If there’s one thing Predator does that barely qualifies as somewhat interesting, it’s non-linear progression. Yeah, some levels have different exits that take you through a separate progression of stages. This is a godsend. It makes the game more tolerable by not requiring you to beat all thirty levels to get to the end. Less Predator is always something to be thankful for. 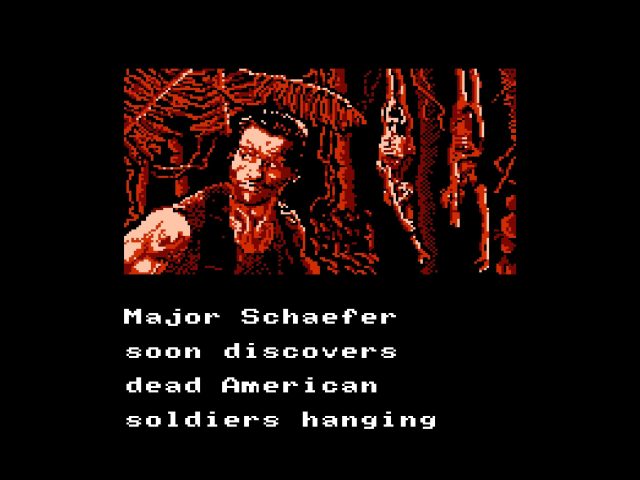 Speaking of which, there are continues that take you back to the last Big Mode. This means it’s actually possible to beat Predator, I just don’t think you’d want to.

The reason I consider Predator on NES to be the worst game I’ve played, it’s because it’s obvious no one cared. Except for the composer. The music is actually decent. Probably not something you’ll be putting on your playlist, but while everyone else was aiming for the barest minimum, no one told that to Junichi Saito. The music is listenable, which is more than a basically unplayable game deserves.

Also, I’m again stricken that there are no credits in the game. There are a few in the manual, but it’s all testing and production staff; no developers.