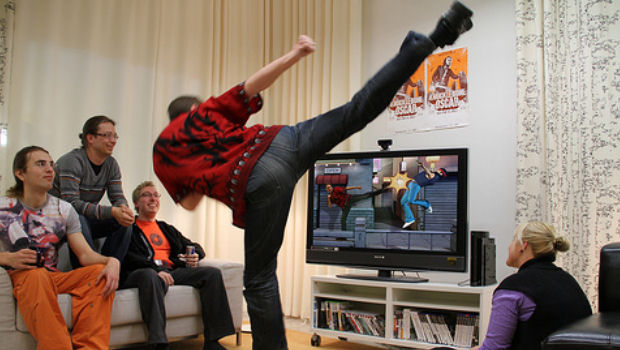 We’ve just received this trailer for Kung-Fu Live, the game that has you moving your body much like you would in a Microsoft Natal game, but without the Natal tech. This is a PlayStation Network release for PS3, actually. From when we first heard about the game we’ve been wondering how it would work. Now, thanks to this trailer, we have a pretty good idea.

You actually step inside the game, where you’ll punch, kick and jump, making your way through enemies waves. The game scans your motions in real time, so you’re able to even duck to dodge a flying kick. Later in the trailer you’ll see special moves like a “power punch” and a “ground shaker” that look to be pretty fun.

“The trailer unveils a closer look at this project, which represents a long-time goal of ours to let gamers truly step into the world of a fast-paced fighting game using their own likeness without the need for a backdrop,” said Teemu Mäki-Patola, CEO of Virtual Air Guitar Company Ltd. “The player’s motions do not equate to button-presses in our game. The full range of their body IS the controller, allowing a wild and frenetic gaming experience that challenges players to execute both real and exaggerated martial arts moves against an advanced and aggressive AI system.”

God, I’m sweating just watching this. It really looks like a workout! They tell us that the game will be on the E3 show floor to try. I’m not sure that I’m ready to have everyone watch me jumping around like a dumb ass.