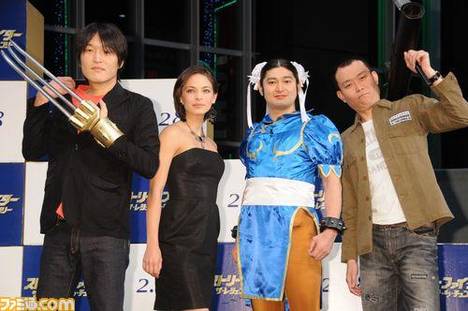 Famitsu has some pictures and a video of Kristen Kreuk and two other guys who most likely had some involvement with the Street Fighter: The Legend of Chun-Li movie from the premier event over in Japan yesterday. They talked about the movie to all the fans and press at the event before letting them check out the film. I’m kind of guessing that, actually. I don’t speak Japanese and Dick McVengeance was too busy fapping over d*ckgirls to answer my IMs so I’m not sure.

Anyway, this is Japan so something really f*cking weird needed to happen. At the 2:45 mark, a guy dressed up as Chun-Li enters the stage to fight Kristen Kreuk. The crossed-dressed guy was a push over though, as Kristen Kreuk gives the guy a Falcon Knee … and that wire that MAGICALLY appeared out of NOWHERE also helped out Kristen Kreuk a little.

Head on over to Famitsu to check out Kristen and the wire tag team on Bro Chun-Li.

[Spotted on GoNintendo … why did you shave your beard RawMeatCowboy!?]