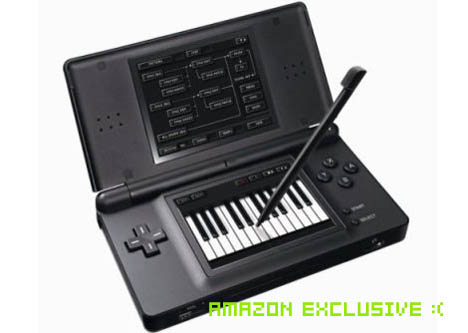 If you’re a regular reader, you’ll know that I’ve been freaking the f*ck out over a new Nintendo DS synthesizer called Korg DS-10. It’s not a game; it’s a music making tool, and people are performing live with it! I preordered this son of a bitch faster than you can say “band geek.”

The very importer I preorderd this title with contacted me this morning with some interesting news. The price has been hiked up a bit, from $48.90 to $62.90. Why? It seems that they heard Amazon Japan had the exclusive on this title. National Console Support heard this earlier and passed it off as something that was surely incorrect. Now they’ve found out that the Korg DS-10 software is indeed an Amazon Japan exclusive. Because of this, their distributor is helping them order copies from Amazon, but this means that they have to pay retail, shipping fees, and taxes.

This means that none of Japan’s software and game stores will stock this title. And, anyone who has ever wanted to buy something from Amazon Japan can tell you that they only accept orders from Japan. So your only choice is to go with an importer.

NCS is now sending out emails to those who preordered earlier to reconfirm their interest in the title after this price increase. For me, I’m happy to pay what I need to get it into my hands. They expect that it will ship on July 24th.