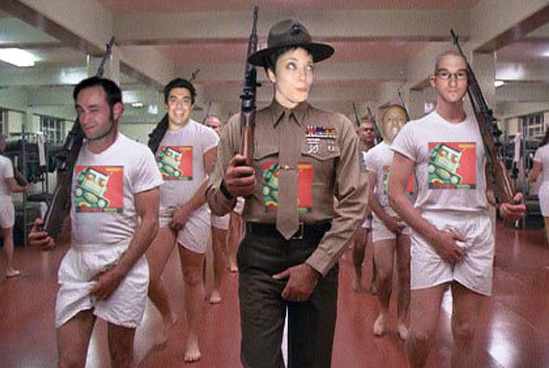 The next time someone starts getting bitchcakes about violence in gaming, it’s time to kick them in the face and forcibly jerk it in the direction of Korea. Apparently internet addiction is such an acute problem in Southern Korea that a boot camp has been developed to remind its attendees of “friendship, routine, the outdoors and hard (physical) work.” What’s the outdoors, again?

Korean households are extremely tapped into the electronic universe. Roughly ninety percent of these residents have high speed broadbands in their homes. The focus is on MMORPG gaming, which gamers play competitively as a sport. In fact, one can’t walk a block without bumping into an internet cafe, which will inevitably be chock full of Koreans glued rapturously to computer screens. Up to 30 percent of South Koreans under 18 (about 2.4 million people) are at risk of compulsive internet addiction.

Not only does the boot camp exist (and is paid for entirely by the government,) but the Korean government has developed a network of 140 counseling facilities for Internet addiction and boasts over 100 treatment programs at hospitals. One of the boot camp participators, 15 year old Lee Chang-Hoon, was spending 17 hours a day online and skipped school several times a week to catch up on sleep.

Tell you what, guys: The Destructoid Boot Camp will not cure you of internet addiction, but will educate you in the art of lolcats, gamer in-jokes and forum flamewars.  It’s a mere $10k a month to sign up your child for a comprehensive program which he/she will emerge from permanently transformed. What are you waiting for? Please direct all inquiries, donations and Paypal payments to [email protected]*

[Via Kotaku, thanks Lemon!]

*Destructoid Boot Camp is not responsible for any excessive profanity, sexual injuries or bodily damage that may be incurred during an attendee’s stay. All fees are non-refundable and will be used for intoxication purposes. Please be aware all attendees will be tit-raped by Ron Workman upon entry. Thank you for your patronage.