Last week, Konami announced its intention to focus on mobile gaming going forward, saying the platform is the future of the industry. This morning the company proved that even the most complicated console game can feel right at home on a smartphone when it unveiled Metal Gear Solid V: The Phantom Pain for the iPhone.

“The future of the industry is today,” said spokesman Don Yoku Shiri at the game’s unveiling. “No longer will our beloved franchises be shackled to a complicated and burdensome controller. With touch screen technology, we have created a simple to use control scheme that will give players the full Metal Gear experience right in the palm of their hands.”

Metal Gear Solid V: The Phantom Pain for mobile will launch this fall alongside the console versions. The game is free-to-play, but it features microtransactions and pay-to-win options that will be as obtrusive and overbearing as possible.

“When you pause the game, you will be asked to purchase a microtransaction,” Shiri explained. “Every radio transmission ends with the person you are speaking to trying to sell you an in-game product. If you somehow manage to go 10 minutes without buying something, the ‘Pay to Win’ button will transform into a giant black bar that you can’t get rid of until you give us some goddamn money.” 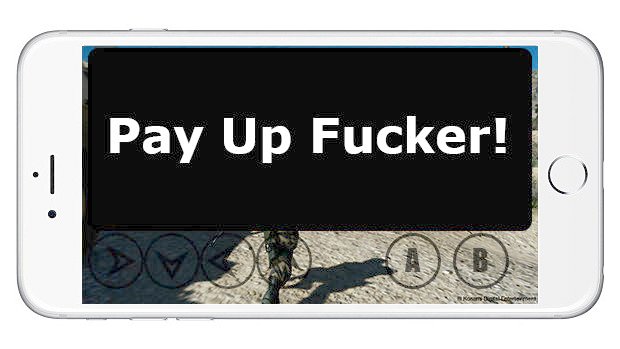