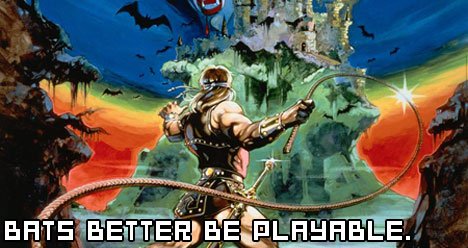 The fact that it’s coming isn’t news — Nintendo Power has the exclusive first look at the Wii exclusive Castlevania Judgement in its latest issue. But we just got the press release and its been confirmed that this isn’t a fever dream of some sort: they’re making a God damned Castlevania fighting game.

The game will feature fully-rendered 3D environments and gamers can choose to play as a variety of characters from the Castlevania universe, all designed by manga artist Takeshi Obata. The title will take advantage of the Wii’s motion-sensing controls, and wlil be used for attacks and interaction with the game’s multiple environments. Additionally, some characters will be able to set traps and control monsters; more zombies in fighting games, thanks.

Konami has confirmed that the game will be playable online with the Nintendo Wi-Fi connection, and will connect with the upcoming DS title, Castlevania: Order of Ecclesia, to unlock bonus content. Konami hasn’t sent along any screens, but we’ve sent our flying monkeys to their offices; hopefully they’ll return with the goods in short order.

Castlevania Judgment will be released this fall. In the meantime, please enjoy the PR speak after the jump.

El Segundo, Calif. – July 1, 2008 – Konami Digital Entertainment, Inc. today announced that Castlevania Judgment, the first Castlevania title in the fighting game genre, is currently in development exclusively for Wii™. Developed by legendary Castlevania series producer Koji “Iga” Igarashi, Castlevania Judgment bridges the past with the present as it pits several generations of the Belmont clan against a host of characters that span the franchise’s 22-year history.

“We wanted to take this addition to the signature Konami franchise in a direction that really sets it apart from the previous Castlevania titles in the series,” said Anthony Crouts, Vice President of Marketing for Konami Digital Entertainment, Inc. “The Wii Remote™ and Nunchuk capabilities, along with the iconic characters, make this game the ideal entry point into the fighting game genre. This combination is certain to thrill old and new fans of the franchise. “

With 3D environments rendered on Wii, players can choose sides in an epic battle of good versus evil using iconic Castlevania characters designed by famed manga artist Takeshi Obata. Using the motion-sensing controls of the Nunchuk and Wii Remote™, players can slash, stab and whip their way across a variety of stages and environmental elements with various surrounding objects as weapons. Select characters can also set traps and make use of monsters on the field to achieve victory in a clash of epic proportions. As an added bonus, players are also able to compete head-to-head using the Nintendo Wi-Fi Connection™ and connect with Castlevania: Order of Ecclesia on the Nintendo DSÔ to unlock bonus gameplay content.