Everyone’s favourite publisher Konami has released a “heritage game survey”, asking players about some of its IPs (as seen in the image below) and how they feel about them. Importantly, it’s asking what we’d like to see brought back. 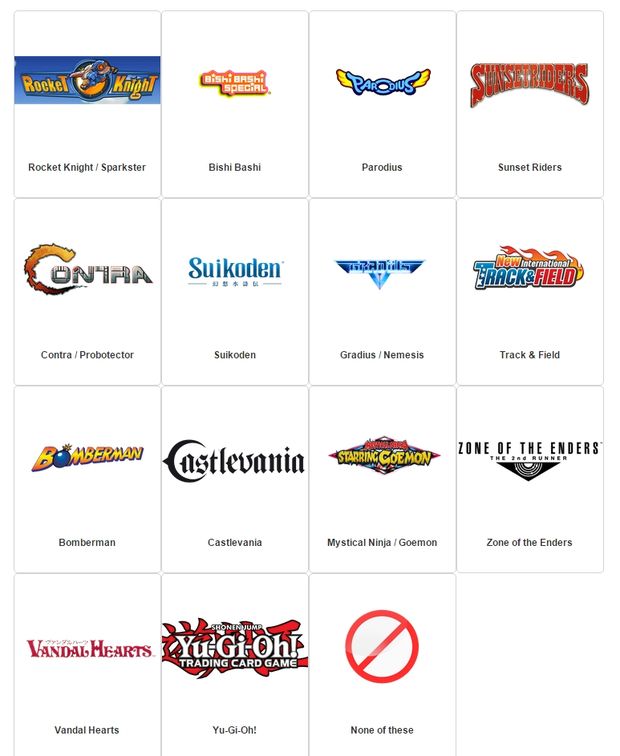 The survey features a weird mix of well-known and kind of obscure: Vandal Hearts and Suikoden are put up alongside bigger hitters like Castlevania and Bomberman. Normally this would just register as standard market research guff to me, but there are two things worth pointing out:

Firstly, there is absolutely no mention of two of Konami’s biggest IPs: Silent Hill and Metal Gear. If this were normal market research, surely it’d be valuable to compare the likes of Suikoden with titans like Silent Hill? Factor in the fact this survey is apparently about Konami’s heritage, it strikes me as odd they’re nowhere to be seen.

This makes me think Konami might be trying to claw its way back into someone’s (or everyone’s considering just how much good will they’ve torched recently) good books by throwing out a few reboots and sequels to some more beloved series. As long as they’re not Silent Hill or Metal Gear. We don’t talk about those.

There are no confirmations that Konami actually is bringing back any of them, but it’s interesting to see it even being mentioned considering how Konami likes to just go totally silent on certain recent issues.

Which Konami IPs would you like to see come back? I hope we see a gritty, futuristic Bomberman. I think that’d be just swell.

Filed under... #Bomberman#Castlevania#Contra#Konami#Zone of the Enders