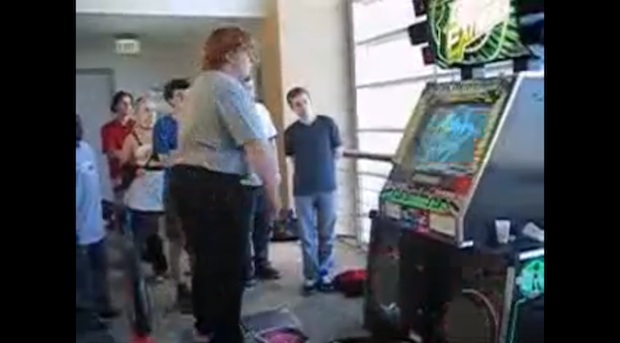 Well, not quite. Konami is set to hold their first ever Childhood Obesity Summit alongside in West Virginia later this month. During this event they’ll also hold a Dance Dance Revolution tournament for school-age children from across WV. This guy would totally win.

According to Gamasutra, the summit, to be held in Charleston July 27 and 28, will also host representatives from the President’s Council on Fitness, Sports & Nutrition, the U.S. Department of Health & Human Services and other state-level speakers, as well as Dr. Michael Dansinger from NBC’s “The Biggest Loser.” Konami is joined by the West Virginia University Extension Service and West Virginia Public Employees Insurance Agency in hosting the summit.

This second annual tournament will have kids competing for scholarships and other prizes. Not necessarily big kids, mind you. Hmm. This all reminds me of a favorite GIF file.

Konami President Shinji Hirano said in a statement that this is the third tournament they’ve brought to a school district in the US. “We plan to continue our push to help encourage today’s youth to lead more active and healthier lifestyles in a way that works best for them,” he said.