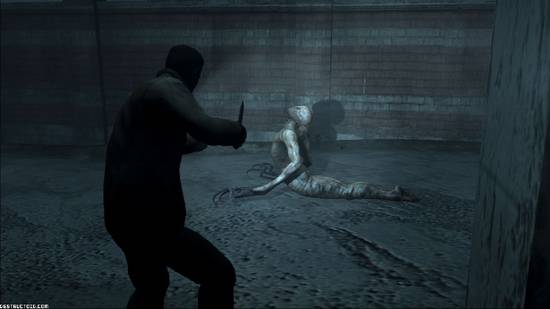 Konami has released an unlucky 13 new screenshots for the next Silent Hill title, the recently christened Silent Hill: Homecoming. They feature everything you’d expect — fog, gaunt weirdos with sunken cheeks, a creepy playground, a monster coming out of the ground. Yup, definitely Silent Hill.

As some of you may know, the series has been handed over to California-based developer The Collective. It’s unfortunate that their body of work is so spotty, consisting mostly of television and film licensed titles, including the Dirty Harry game which will never see the light of day. They did make Buffy: The Vampire Slayer for the Xbox, which to this day remains one of my favorite Buffy console games out of the two that were released.

Silent Hill: Homecoming has been confirmed to be coming to Europe this September for the PlayStation 3 and Xbox 360. For what it’s worth, the North American arm of GameStop is currently listing the game for a 2009 release, so you may want to start saving those import dollars.